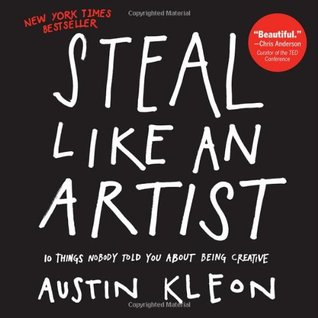 I picked this book up on a recent visit to the Art Institute of Chicago (I think it was AIC—I’ve been to a lot of art museum gift shops lately) because I was intrigued by the cover, the title, and the subtitle: “10 Things Nobody Told You About Being Creative.”

Actually, if you’re an artist already, you’ve probably already been told a lot of these things, and you may even have concluded that some of them are bogus, or at least not something that will work for you (that’s okay, according to Kleon).

Congratulations to Kleon for getting this book published and getting people like me to buy it. The book was an evening’s amusement, and not as frustratingly repetitive as some other books on creativity, like, say The Artist’s Way, which I’m also burrowing through at the moment. And there are some good reminders here about some techniques for enhancing your own creativity. One in particular that I like is “Climb your own Family Tree.” The idea is to focus on one artist you love and learn everything there is to know about that person. Then find three people that artist loved and find out everything you can about them. I think many of us take the first step, but we might not take the second. I think I have begun climbing several trees but usually get down from the first branch and move to the next tree.

Here’s another tip from the book: Be Nice (The world is a small town). And one way of being nice is to say nice things about people on the Internet. Which is what I’m doing now. I enjoyed this Kleon guy’s book. You might also. His website has some cool stuff on it, too: www.austinkleon.com.