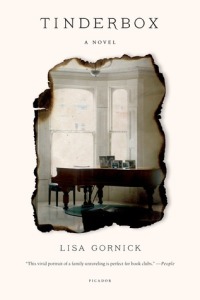 Tinderbox: A Novel by Lisa Gornick

I had not heard of this novel until I saw that the author would be in the area visiting WriterHouse. I like events there because they usually aren’t just a reading–which I would also enjoy, of course–but often involve a conversation between the featured author and another writer who has taken a close look at the book under discussion.

In this case, the “other writer” was Virginia Pye, author of River of Dust: A Novel, which was the topic of discussion when I interviewed the author in the same venue. Ginny’s book takes place in China and Lisa’s book is set mostly in Manhattan but with significant episodes in Peru and Morocco, so the topic of the conversation was, primarily, the importance of travel in the work of these particular writers. Given my own interests and the key role travel plays in my work, I was glad to participate in the event.

I enjoyed the book, for the most part. Gornick is a psychoanalyst and so she digs more deeply into characters than I think a lot of writers do, revealing not only their backstories but also their serious flaws. I saw similarities with the work of Amy Bloom, another therapist. The characters in the book all–with the exception of the six-year-old, but one guesses he’ll develop his quirks later–have noticeable psychological problems. We all have issues, of course, but most issues don’t need the help of a therapist to deal with. All of these people needed help and not all of them were getting it, which helps add drama to the narrative. The only one in therapy, in fact, was the therapist, Myra, who is the book’s central character.

Do you need to like the characters in a book? Of course not. I did, though, like Myra and also her daughter, Caro, despite their quirks. These are the women who are holding the family together under enormous stresses. The men in the family, however, were less admirable. Larry, Myra’s ex-husband, brought their marriage to an end by cheating on her, and while he’s not a jerk, he does seem awfully needy. Their son, Adam, is especially unlikable. The nurse, Tali, who emerges late in the book, is somewhat heroic, but lest we be too fond of him, we’re told that he’s a slob. He’s the best of the bunch.

Apart from the characters, the story is quite interesting. The narrative is launched by the impending arrival in Myra’s home for a year-long visit of Adam, his Moroccan wife Rachida, and their son Omar. To help handle this household, Myra engages Eva, a young woman from Iquitos, Peru, who is descended from Moroccan Jewish traders. This is the classic “a stranger comes to town” story arc, and it works very well here; the arrival of all of these strangers in a previously sedate household will create all kinds of problems for Myra to deal with.

And beside the story, there is the background, which is also very interesting–this unusual historical connection between Morocco and Peru, and the coming together in New York.

Except for the portrayal of the male characters here–perhaps something no one else will be sensitive to–it’s an enjoyable read, and I recommend it.