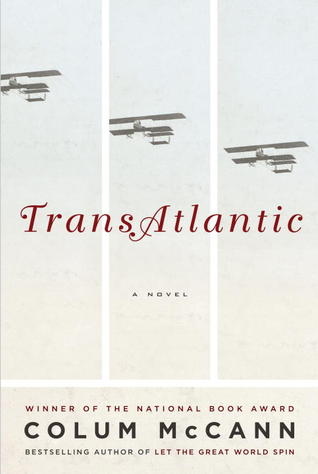 TransAtlantic: A Novel by Colum McCann

As with McCann’s previous novel, the masterful Let the Great World Spin, this novel is told in strands that seem quite separate at first but eventually come together. First we see two pilots making a transatlantic flight in 1919, from Newfoundland to Ireland. Then we step back to 1845 and Frederick Douglass’s visit to Ireland to promote his book and to raise funds for the abolitionist cause. Then we jump ahead to 1998 and George Mitchell’s negotiation of the Irish peace settlement. That’s the first section of the novel and then we begin to see how these different stories relate to each other.

There are some broad themes here, one of which is the demoralizing effect of poverty. Douglass–still technically a slave and so with his own troubles–is deeply moved by the poverty he observes in Ireland. By the end of the book, set in 2011, that poverty has come full circle. McCann is also drawing a connection between the Irish “Troubles” and the American Civil War. Not an equivalence, exactly, but both tragic wars fought for reasons that are sometimes hard to fathom.

Terrific book. Not as terrific as Let the Great World Spin, which caused me to stop writing for a time, but a very enjoyable read.