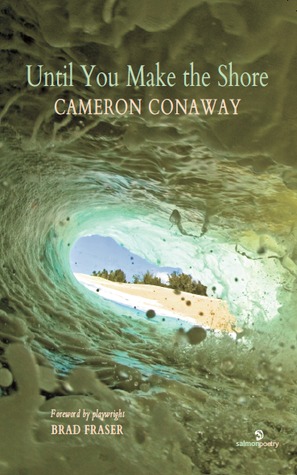 Until You Make the Shore

This book came as something of a surprise. I’ve known Conaway for a few years, first introduced by the poet Todd Davis. We stayed in touch and I enjoyed his book Caged: Memoirs of a Cage-fighting Poet, which came out in 2011. I know that he spent the next couple of years in Thailand doing some very interesting work in both human rights and poetry. But we ran into each other earlier this year at the AWP Conference in Seattle where he was launching Until You Make the Shore, his new poetry collection from Salmon Poetry. I bought it, he signed it for me, and I have just managed to make time to read it.

Not what I was expecting. (Which was what? I don’t know—martial arts? Thailand?) The book is an impressive series of poems in the voices of four female inmates of the Pima County Juvenile Detention Center, with the voice of the poet inserted as the creative writing instructor of the four young women. These very powerful voices come through loud and clear. They tell very dark stories, each different and yet disturbingly the same—what they have done, what’s been done to them, what has happened in their homes.

What Conaway has done here is very exciting, I think. The book includes a foreword by the playwright Brad Fraser, and that seems entirely appropriate to me. It isn’t at all difficult to imagine this book staged, maybe with the instructor in the middle, surrounded by the four women, each telling their story through their poems. I’d like to see that.