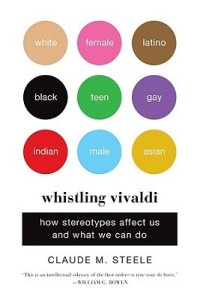 Whistling Vivaldi: How Stereotypes Affect Us and What We Can Do (Issues of Our Time) by Claude M. Steele

I read this book because Northwestern University picked it this year for its One Book, One Northwestern program (which invites all new students to read the same book and then presents a year of related programming in order to explore the topic in depth), and during an alumni conference I went to last week we were able to participate in a discussion. The discussion was so-so (too many people hadn’t actually read the book), but I thought the book was terrific.

Steele, a social psychologist, has been studying the phenomenon of “stereotype threat” for decades. Basically, this is when stereotyped groups are perceived to perform poorly in a certain area. Members of the group then when tested in that area are afraid they will confirm the stereotype, and as a result they perform less well. If the “threat” is eliminated–if the test is presented as something else–the group generally performs as well as members of other groups.

The book presents an overwhelming amount of experimental data that seems to confirm the theory and its corollaries. Plus, helpfully, one chapter offers some concrete suggestions for eliminating the threat’s effect on performance. The book is a pretty quick read, is written in a clear language that doesn’t use too much psychological jargon, and makes a compelling argument. I highly recommend it.