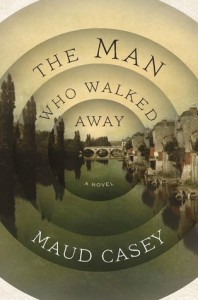 The Man Who Walked Away
by Maud Casey
Bloomsbury 2014

Maud Casey was part of a panel on book publicity at the Virginia Festival of the Book this year. I’ve been hearing about her for years but haven’t read her work, so I took the opportunity to get her new book, The Man Who Walked Away. It’s unlike anything I’ve ever read. Kudos to Bloomsbury for publishing such a lyrical, literary book.

The book is a fictionalized account of a real case treated by a real doctor in a late 19th Century Bordeaux asylum. In the novel, “the Doctor” (never named) treats his most interesting patient, Albert, a young man (about twenty, we’re told, although he doesn’t seem that young). Albert has a problem of wandering away and waking up in strange places not knowing how he got there. Meanwhile, it’s the early days of psychiatry, and the Doctor does what he can to treat Albert and the other patients in the asylum (and deal with his own problems). The Doctor frequently visits Paris where he and other doctors attend demonstrations by “the great doctor,” including one that introduces the idea of hypnosis in treating hysteria and other forms of mental illness. The Doctor decides to give it a try with Albert.

Not much happens in the book in the way of plot, although both Albert and the Doctor have complex backgrounds that Casey explores beautifully. The language throughout is exquisite. Christine Schutt calls the book “ensorcelling.” What? (It means “bewitching.”)