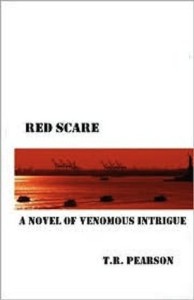 I hadn’t heard of of Pearson until his name appeared on a list of “literary mystery” writers in a graduate seminar I took on plot more than ten years ago. I read his book Blue Ridge then and shortly after that Polar, two small-town mysteries set in my part of Virginia (he lives, or lived, not far from me). I even caught an event he did at a bookstore in Roanoke at about that time. (Loved the event: he only read one page from the book and spent the rest of the time talking about his experience in Hollywood working on screenplays, and while he spoke his dog wandered among the listeners.)

I then picked up his earlier books, which are highly regarded, but I confess I still haven’t read them.

Recently I noticed that he had self-published a few books for Kindle, so I bought them. Red Scare, a novella, is the first of these that I’ve read.

It’s a quirky little mystery/romance about a high school teacher and a museum curator who become involved in the effects of a centuries-old Venetian curse that causes ten murders every ten years. The teacher, a widower, is ready, finally, to date again, and as it happens the museum curator is a slob, just like his late wife, so . . .

The curse, by the way, involves some nasty red lizards who emerge from a palace in Venice and make their way around the world by crawling into backpacks and camera bags. Very creepy.

It’s not a great book, but it’s short and distracting.