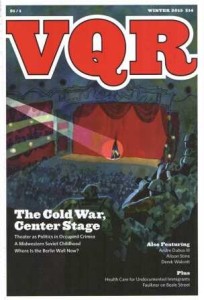 I think literary magazines are great, both print and online. My habit, though, is to let the print magazines pile up, unread. For years. I recently had to move all my old copies of journals into boxes to make room on the shelves for all the unread books that had accumulated on the floor. Really. And new magazines arrive weekly, so it’s not as if the boxes solved a problem.

It is imperative, therefore, that I do a better job of reading the magazines and passing them along to other people. No more hoarding for me. There just isn’t room.

I start this initiative with the magazine that arrived most recently, the Winter 2015 issue of the Virginia Quarterly Review. I’ve long admired this journal, and because it is based in Charlottesville, not far from where I live, I’ve had some interaction with its staff over the years. It’s a beautifully produced book, and everyone should subscribe, or at least find a copy and read.

Having said that, I have mixed views on this new issue, which I guess is okay. There’s something in it for everyone. I actually liked the nonfiction more than the fiction. Let’s break it down.

There’s an interview called “Going Rogue” with some rogue taxidermists—people who stuff animals unconventionally. Never heard of such a thing, but it sounds pretty interesting, and the photographs are fascinating. There’s also an interview with Derek Walcott which is interesting. His answers are terse (although that might be in the editing) but the discussion ranges from Pasternak to Wordsworth to Seamus Heaney.

A section called “Talisman” is an essay by Andre Dubus III called “Beneath,” which is about the evolution of his workspace. I enjoy reading about writers’ desks and studies, so this was great. As it happens, I recently read his memoir, Townie, and am currently listening to the audiobook version of The House of Sand and Fog, which I’m enjoying.

“Snowfall Blues” is an essay by Alison Stine about Jackson C. Frank, a musician I’ve never heard of. The writer seems at a great distance from her subject, but the piece is clear and well written and informative.

And speaking of informative, “Art and Politics in Occupied Crimea,” by Dimiter Kenarov with photographs by Boryana Katsarova is fascinating, and covers exactly what you might expect from the title. Curiously, we also get an essay about Russian immigrants in the US in Liesl Schillinger’s “My Midwestern Soviet Childhood.”

Given recent racial tensions in this country, I was really drawn into Thomas Chatterton Williams’s piece, “Black and Blue and Blond.” Of mixed race, but identifying as Black, he married a French woman with whom he has a blond child. Needless to say, there are issues. There’s a long essay about health care for undocumented immigrants in Houston that I confess I only skimmed, and another piece, by Kwame Dawes, “The Guardy and the Shame,” about homophobia and AIDS in Jamaica.

Which brings me to the fiction, usually the section of a journal I focus on.

The first story, “The Fathoms,” by Amanda Korman was enjoyable if only that it deals freshly with a familiar issue. What’s familiar is whether a young couple should have a child. The wife is working, the husband is in school (perpetually, it seems). What’s fresh is that this is a Jewish couple in Washington DC (he is, apparently, more observant than she), and she’s going regularly to a mikvah, which (and this was what was new to me) is a ritual immersion bath for purification. She wouldn’t be going to the mikvah if she were pregnant, however, which everyone assumes is her goal. Except she’s on the pill, which she hides from the woman who runs the mikvah.

I didn’t care for “Dead Right There” by Aaron Gwyn. All the stories about the war in Iraq seem the same to me, and there have been a lot of them lately.

“Soucouyant,” by Tiffany Briere, is probably my favorite of the four stories in this issue. It deals with a family of immigrants from Guyana, including a daughter, Suku, who is a post-doc at Yale working on genetic analysis of aggression in mice (or something like that). She gets a call from home and learns that her father, Sherlock, will be having both legs amputated due to diabetes. She goes home, even though she’s estranged from her father and sister, and isn’t sure what she’s going to do. I don’t think she’s surprised by the ethical dilemma her father presents her with though, and the story leaves us hanging. Loved the ending.

Of the four stories in this issue, the only one by an author I’m familiar with is “Avarice” by Charles Baxter. I like Baxter’s work and studied with him at Bread Loaf years ago, but I can’t say I loved this story. Told from the point of view of a religious woman recently diagnosed with breast cancer (which she assumes is fatal, apparently), the voice seems forced. In the first person, she talks about her life, her husband’s death (hit by a drunk driver), and interacts with her former daughter-in-law who now lives with her (as does her son and his current wife, along with the son’s two children, one with each wife).

I’ve gone on about this issue much longer than I intended, but VQR is always packed.