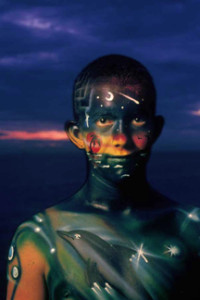 Subtropics is the journal of the University of Florida edited by David Leavitt and Sidney Wade. I’ve been a subscriber off and on since the magazine debuted in 2006. I’ve just read Issue 17 Winter/Spring 2014. (The image at left is Teen in Body Paint by Roger Sacha and graces the cover of the issue, although there it is partially obscured by a list of contributors.)

There is just one nonfiction piece in the issue, so let me start with that: “Authorship in Contemporary American Literature” by Anis Shivani. Shivani came to the attention of a lot of writers through some controversial columns he wrote for The Huffington Post. This essay is in that vein, but I think it will appeal mostly to “literary critics” who actually care about the Foucault, Derrida, Barthes, deconstruction, the New Criticism, and all that has flowed since. Academics might. I don’t think writers do.

He begins with Barthes’s essay “The Death of the Author.” The idea, as I understand it, is that the author disappears as soon as the work is written. Fair enough. In a workshop, I would argue that the work must stand on its own. (And yet, there is context to consider, and why should the reader ignore it?) Apparently, not much has changed in the last 50 years..

Near the end of the essay, Shivani takes a stab at a conclusion: “Aside from rebellious authors like Rushdie, who don’t seem to have gotten the memo, authors have disappeared from culture–they have in fact died, except that they themselves seem not to have noticed that they have died.” I don’t know about anyone else, but I’m still here.

As for the poetry, there’s a lot. I noticed that several friends/Facebook friends have poems here, including Lesley Harrison, John Poch, and Sandra Marchetti.

The fiction includes several translations. One that I liked particularly is Margarita Khemlin’s “Shady Business,” translated from Russian by Lisa Hayden. In the story, Bella Levina returns to Kiev from Israel after many years and then disappears. Her family comes to look for her and by visiting the Jewish Cemetery in their ancestral village learn what happened during the war.

I also liked Aaron Hamburger’s “Honeymoon for One,” a story about a recently married gay man who is obsessed with pandas and so, when his husband can’t travel with him, goes on his own to the preserve in China where he can interact with the animals. He also interacts, amusingly, with his tour guide, Fanny.

And I was enjoying China Miéville’s “Säcken” until it turned into a horror story. Joanna, a historian, takes her lover Mel (a woman) to a remote cabin in Germany where she intends to finish some essays. Mel is spooked by something–something in the lake, a cockerel on the shore–and insists on leaving. After she returns to London, Joanna disappears. Mel and Joanna’s family return to investigate . . .

These were the highlights for me, but there’s a lot more.