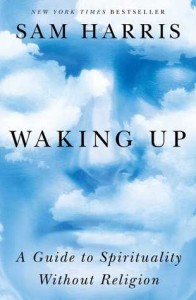 Waking Up: A Guide to Spirituality Without Religion by Sam Harris

Recently, I had a brief online exchange with a former student who questioned by use of the word “spiritual” outside of a religious context. Certainly, many people do refer to religious experiences when they use the term, but increasingly the term has come to mean other forms of inward exploration, including efforts to seek an understanding of one’s position in the universe–relationships with the environment and with others.

Sam Harris is using the term in a slightly different, but related way, I think. By “spirituality” he seems to mean “self transcendence,” which I think is perhaps both more internal than my use of the term and also larger, because it seems to place a greater emphasis on a unified consciousness.

In any event, I enjoyed listening to Harris’s narration of his book, and agreed with him on most points. The basic idea, I think, is that one doesn’t need religion in order to explore and enlarge the mind. Through various techniques, including meditation and/or mind-altering drugs, enlightenment is attainable. His lengthy discussion of psychedelic drugs is interesting, although not terribly helpful for most people. But his tips for meditation are sound.