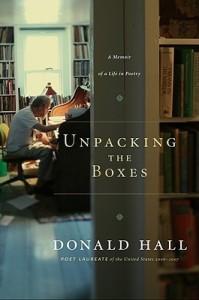 Unpacking the Boxes: A Memoir of a Life in Poetry by Donald Hall

Over the years I have read an occasional Donald Hall poem, but I can’t say I’m familiar with his work. But he appeared on a recent cover of Poets & Writers, so I thought it was time I corrected that. While looking for his work in the poetry section of a used bookstore, I came across this book, one of his memoirs. That seemed like a good place to start, so I bought it.

The book is fascinating. It has a dual beginning—Hall’s early interest in poetry as a boy and then the triggering of his memories as an older man returning to New Hampshire, unpacking the boxes.

After a couple of years in a public high school, he moves on to Phillips Exeter Academy and then Harvard and then Oxford, mingling with some of the 20th Century’s most important poets. He drops their names, but it doesn’t feel like name dropping because he is increasingly becoming one of them. He goes into some depth about his stays at Harvard and Oxford, presumably because these were so important to his development, but he breezes over his first marriage—too painful?—and his second, to Jane Kenyon, which he has written about elsewhere. (Interesting: the book he has written about their marriage was originally the middle section of what became this book, but it was extracted and expanded.)

The chapter I found most interesting, though, has least to do with poetry. The last chapter, “The Planet of Antiquity,” deals with what it is like for him to be getting old. And the book was published seven years ago, so he’s only that much older now.

Having come to know him a little through this book, I look forward to reading his poetry.