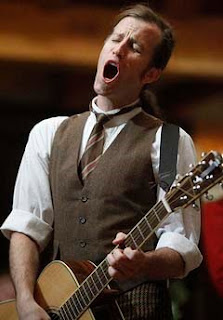 No way was I going to miss the the American Shakespeare Center Actors’ Renaissance Season Benefit Concert. I’ve been out of town and got back mid-afternoon after a long drive, but I made it to tonight’s benefit concert. And it was even better than I expected, which is hard for me to imagine, because I had pretty high expectations.

This isn’t a review. It’s more like a love letter. I would be a big fan of the ASC even if there were no music. But the actors sing before each show and during the interludes, and sometimes during the shows themselves. The music is always excellent because almost all of the actors in the company are terrific musicians. And sometimes at the shows I wish I could listen more closely to the songs, which deserve more attention than they get (since people are finding their seats, or chatting, and otherwise getting settled). This concert was a chance for the music to take center stage, so to speak.

And it was simply great. And the audience LOVED it. I think even the actors were taken aback by the love from the audience. It’s tough to single anyone out, and I don’t mean to slight anyone, but here are some thoughts about the show:

* Chris Johnston is an amazing musician. How many instruments did he play during the course of the evening? At least eight, and chances are I missed one or two. (He’s not the only one who plays multiple instruments, either–John Harrell, Benjamin Curns, Daniel Kennedy, Tyler Moss, and Greg Phelps all played more than one.) Chris is also fun to watch and listen to when he’s singing. He’s a huge talent.

* I love Miriam Donald’s voice, and we got to hear a lot of it tonight. She looked like she was having such a good time, too!

* We didn’t hear enough of Denise Burbach, in my view, whose voice is also wonderful, but she was featured in a couple of songs and they were great.

* Benjamin Curns, like Chris Johnston, is a fine musician. What I appreciate most about him, though, are his vocals, and he really commands the stage when he’s singing.

* John Harrell’s talents seem boundless. Besides playing several instruments, he is acting when he sings. You can see it in his face. Plus, his children were on stage for the first half of the show and they were also completely into the music.

* Daniel Kennedy plays both bass and trumpet, which is an odd combination, but he does a great job with both, and he also has great presence.

* Tyler Moss loves to perform, and he’s emotional about it. So much energy on the stage tonight! Great songs, and great performances. The audience loved him.

* The audience also loved Gregory Jon Phelps. I was hoping he and Miriam Donald would perform the duet they do in Twelfth Night, and they did. But Phelps–who is another play of many instruments–also was featured in a number of other songs, some serious and beautiful and some simply hilarious. Phelps is very funny.

* Sarah Fallon, Allison Glenzer, and Rene Thornton, Jr. weren’t featured as much as the others, but they were there and having a blast.

I see all ASC shows and will continue to do so. And I’ll also plan to be at the next concert these extremely talented actors give. And it should be noted that the actors contributed their time and talents to this fundraising venture. The theater deserves the support of our community and theatergoers everywhere. I urge you to make a contribution to the American Shakespeare Center: here