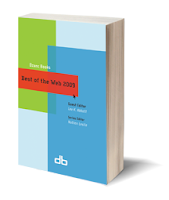 I’m pleased to join the internet invasion by Best of the Web 2009 from Dzanc Books by presenting this guest post from Marcela Fuentes, whose flash “An Ugly Man” originally appeared in The Vestal Review and is included in BOTW2009.

I’m honored that my story, “An Ugly Man” is included in Dzanc Books’ Best of the Web 2009. This is the first flash fiction piece I’ve ever written—including the title just 424 words.

Writing an “An Ugly Man” was the occasion I had been looking for to use “high-spanic,” a word I first heard from my cousin, Leo Lopez. It was his way of simultaneously mocking the term Hispanic (that government-invented ethnic catch-all) and his own upward mobility. The ideological conflict between the narrator and Luis is, in essence, part of the social and cultural turmoil that produces self-deprecating jokes like “high-spanic.”

To be honest, I never expected this much response to such a little story. I attribute it to the fact that it was published online. A story published on the web stays. Even when a new web issue is released, the archive remains easily accessible to the public no matter how much time passes (unlike a print journal that gets filed or discarded when a new issue comes out). Also, there’s a level of active interest from the online community that I haven’t experienced as much with print magazine readers. The Vestal Review published my story in July 2008. In September a writer/blogger, Jon Morgan Davies, wrote a review of my story at Short Story Reader. In December, out of the blue, I got an email from an English professor at Lake Forest College who said he’d shown my story to his creative writing students and they loved it. It’s refreshing (and amazing!) to see people taking time out of their busy lives to engage with a story—just because they want to.