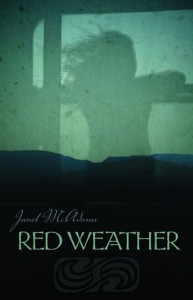 [Scroll down for details on the giveaway.]

Does Barbara Kingsolver know about this book?  (More about Kingsolver below.)

When Neva finally musters the courage to leave her husband—a cartoonish and controlling philanderer who had been her teacher in college—she flees Atlanta, Georgia for Central America. But her choice of destination isn’t just because she’s in hiding from the husband, who doesn’t seem to care that she’s gone. Rather, she goes to the troubled nation of Coatepeque—a stand in for El Salvador—because she thinks that might have been the destination of her parents, who disappeared into apparent exile when she was a child, leaving her to be raised by her grandparents.

It’s a recipe for a decent plot: an innocent abroad, in a war-torn country, no less, searches for something she’s lost, getting into a fair amount of trouble along the way. And there’s no question that the story holds the reader’s interest. And that’s without considering the shadowy lover, or the earthquake, or the mystery surrounding her parents, which is gradually revealed.

For a woman who has not been allowed much independence, Neva proves surprisingly resourceful as her adventure in Coatepeque begins, and that’s at least part of the point. No doubt her husband would be surprised, but she manages to find a place to stay and a teaching job, despite her nearly non-existent Spanish and her general naiveté. And then she becomes more entangled in the local community—the American military advisors, the foreign volunteers, the aid workers, and the handsome, secretive Tomás.

And yet . . . for reasons that aren’t clear, she delays her efforts to search for her parents. There are security issues in the country, certainly, but she doesn’t even ask questions. She doesn’t confide in anyone, including her roommates. She is in limbo, and she seems to be okay with that, no matter how frustrating that might be for the reader. That, too, is part of the point.

McAdams has woven into this thin volume a host of political issues that are sure to remind the reader of Barbara Kingsolver’s work , and it’s not hard to see where her sympathies lie. There is an element of feminism as Neva declares her independence and is eventually able to express herself. Neva, like the author, is part Native American, and the mystery surrounding Neva’s parents is related to the criminal mistreatment of Native Americans in the United States. The civil war in Coatepeque, too, is a manifestation of this theme, and “red” refers not only to the indigenous peoples but also to the Communist rebels and their fellow travelers.

If I have a complaint about this book, it’s that the ending seems a bit rushed. When the crisis comes, there seems little time for Neva—or the reader, for that matter—to reflect. And maybe that, too, is part of the point.

Book Giveaway! Win a copy of Red Weather. All you have to do is comment below AND go here to sign up for my mailing list.  In two weeks, I’ll select a winner at random.