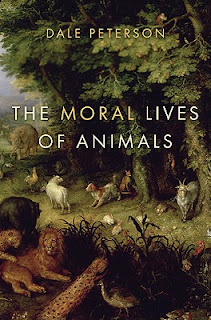 The Moral Lives of Animals

Dale Peterson
Bloomsbury Press (2011)
Having read some recent animal behavior books (such as Temple Grandin’s Animals Make Us Human), I expected this one to be something like those. And it is, in a way, but it’s far more, because the author, Dale Peterson, clearly has in mind homo sapiens as one of the animals he’s talking about. Furthermore, while he’s exploring particular aspects of moral behavior in humans and other large mammals, he really seems to be aiming toward a moral conclusion that mostly applies only to humans.
Because whales are the subject of some of Peterson’s observations, it’s appropriate that he uses the great novel Moby Dick as something of a guide through his subject. He even presents quotations from the book as epigrams to each chapter. (My favorite of these might be the one he uses for the Authority chapter: “Whales in the sea God’s voice obey.”) Of course, Ahab and the other characters from the novel—although they are fictional—provide additional fodder for the discussion of human moral principles.
The book is organized into four parts, each answering a question about morality: Where Does Morality Come From? (In which we learn that there are two kinds of morality—rules and attachments.) What Is Morality? (The Rules.) What is Morality? (The Attachments.) Where is Morality Going?
He begins by noting the linguistic differences in how animals and humans are referred to, and relating that to different ways of viewing animals. The First Way, he suggests, is that “animal minds [are] intelligent entities constructed in humanoid form. The Second Way, which he attributes to Descartes, is that animals have no reason and are essentially “machines made by nature. But there’s a Third Way, associated with Charles Darwin, which follows from the shared evolutionary history among many species, which he believed extended to a mental continuity and even something approaching morality in animals other than humans.
He then proceeds to examine what the moral rules are—for animals as well as humans—when considering Authority, Violence, Sex, Possession, and Communication, followed by the moral attachments—Cooperation, Kindness, Duality, Flexibility, and Peace. In each case, in addition to understanding where the concepts come from for humans, Peterson gives numerous examples of studies of various “intelligent” animals such as whales, elephants, and chimps, as well as anecdotes about the behavior of his own dogs. We learn, then, about authority hierarchies among various animals, particularly violent behavior and its consequences, rules associated with sex and ownership, and the means of communication. We also learn that some species exhibit cooperation and kindness.
Near the end of the book, Peterson explores duality—the differences, or arguable differences, between males and females, between primary references to rules-based morality or attachments-based morality. Differences take many forms, too. Male and female elephants communicate differently, for example. There is a vast size difference between male and female elephants, also, and an even bigger difference between male and female whales. (And yet female spotted hyenas are larger than the males.) These differences contribute to different behaviors. On a related subject, Peterson explores flexibility, and one fascinating study is the evolutionary differences between chimpanzees and bonobos. These apes were the same species 2.5 Million years ago, but for reasons that we don’t know two groups became geographically separated and had limited interaction thereafter. Consequently, their evolutionary paths diverged. One of the differences that arose is that while the chimps remained patriarchal, bonobos developed into mostly matriarchal groups, and that seems to explain a number of behavioral differences between these two closely related species today.
The final chapter of the book takes the story in a surprising direction. It isn’t at this point about the behavior of whales and elephants, but about the war that humans have been carrying out against animals for some time, with the result that most mammals of North America larger than 90 lbs.—about 40 species—became extinct in the late Pleistocene epoch (at the time humans emerged). The same was true in South America and Australia. Elephants fared better because human populations in Africa and Southern Asia were relatively low, but that relative safety came to an end when humans acquired rifles. In the last 30 years alone, the world elephant population has been cut in half.
Peterson imagines human contact with life forms from other planets, which, given the vast numbers of such planets, is increasingly likely. But he’s not optimistic about the results. “If we reached them before they reached us, we would do so probably because we’re technologically more advanced than they. If that’s the case, what indicates that we’ll treat them any differently from the way we’ve treated every other creature with sentience already here on this planet. . . And if the extraterrestrials should reach us first because they’re technologically more advanced than we, what in our experience suggests that their high intelligence and great technology would be accompanied by great wisdom and kindness or would automatically promote high sympathy for another species?” And so, he suggests, “the best hope we have is to demonstrate with our own example that, given time, we can achieve a greater wisdom about ourselves and our relationship with the rest of the natural world down here, on this planet.”
That’s the Peace he’s talking about. It’s a somewhat surprising direction for the book to have taken, but I believe that’s basically the author’s point. And while he doesn’t posit an inter-species golden rule, that’s the basic lesson I take from the book: Do unto other species as you would have other species do unto us.