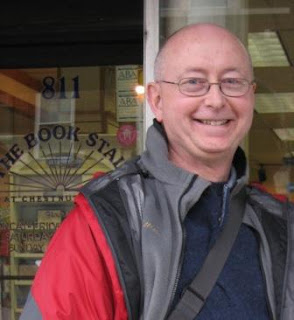 I’m just back from a wonderful trip to Chicago to promote In an Uncharted Country. I was gone four days and made three appearances, and I’m beginning to understand just how much time the whole “book tour” process takes. I had help getting the appearances set up, but still–there was a lot of planning and coordination, and then the trip itself. It’s a big investment of time.

But it was a lot of fun, and we sold a few books. Not a lot of books, but some.

The first stop was at 57th St. Books in Hyde Park. I really like this store, which is crammed with great books, hidden corners, and book-loving people. Most of the chairs the store had set up were filled–with my friends or friends of friends–and things got underway almost before I had a chance to think about it. (I read from “Flood, 1978,” which seems to work well for a store event.) Afterwards, many who attended went over to my friend Carol’s house for pizza and talk. It was great fun. (And I left behind some signed copies of the book at the store, if you need one!)

On Saturday I was joined by lots of family at the Book Stall in Winnetka (see the picture at left) for another reading. This is a suburban store with a different feel, but it’s another great independent bookstore. Again, the store chairs were filled, this time with family and friends from many periods of my life: high school, Peace Corps, law school, law firm, and these writing days. The talk followed the basic pattern, with lots of questions. And that night we celebrated at a new Italian restaurant in Evanston.

Sunday afternoon was a bit different. I had arranged a fireside chat at my fraternity house at Northwestern University. We invited the undergraduate and alumni members, and I had no idea how many would come. In the end, the event was complicated by the USA-Canada gold medal hockey game from the Olympics! At the time we had planned to start, the game was only about half over. Fortunately, though, the guys didn’t mind putting the game on TIVO, and letting me proceed. I didn’t read though, as that seemed unreasonably cruel. I talked, there was a lively Q&A, and then–since the pizza had arrived by then–I stopped and let the game resume. And that was fun, too.