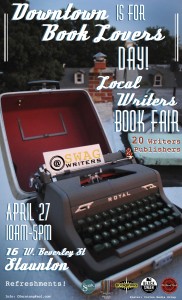 Yesterday (Saturday, April 27, 2013) was the inaugural SWAG Writers Bookfair (Downtown is for Book Lovers Day). To me, it seemed like a success. Throughout the day we had a steady stream of visitors and it seemed like a lot of people left with books. We gained exposure for local writers and for our organization, SWAG Writers (that’s the Staunton-Waynesboro-Augusta Group of Writers, a subchapter of the Virginia Writers Club). And now that it’s over, I thought it would be useful to reflect a little on the experience.