Brandon Patterson’s recent work has appeared in Night Train, Thin Air, Free State Review, and The MacGuffin. He is a former fellow at the Virginia Center for the Creative Arts. 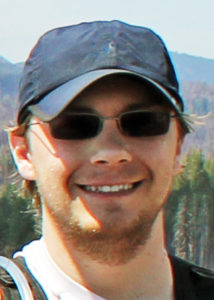 Brandon’s comment on “Jonkshon”—The story has its roots in an interview I conducted with a middle-aged couple who had fled Sierra Leone and resettled in southwestern Virginia. The husband had worked in upper-level management for a telecom; the wife, much like Mrs. Blair, was educated in the US and had a role with the UN. They had one child, a school-aged girl whose name was a combination of her parents’ first names, and they lived in Freetown near the beach. When asked about why the civil war had started, they blamed it entirely on the rural populations; to paraphrase their descriptions, these people were cocaine-addicted, uneducated, and willfully ignorant provincials. I created “Jonkshon” from two of their stories in which they avoided death despite actions I’d call (at best) obtuse. Maybe they embellished the tale to impress listeners, but if that’s the case they did so at their own expense. Whatever its veracity, the interview stayed stuck in my brain until I wrote about it. When I eventually did, I had to square their accounts with the Sierra Leone remembered by other refugees. Joseph and the story’s eventual direction came from this need, as did some edits and additions made since it was first published.