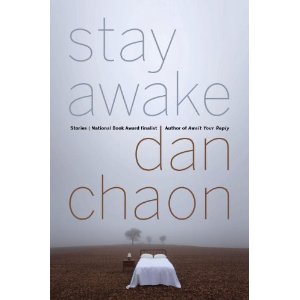 I didn’t know Dan Chaon had a new book coming out until I read Benjamin Percy’s short preview in the February Esquire. It’s a collection of stories called Stay Awake, following Chaon’s well-reviewed  novels Among the Missing and Await Your Reply.
Percy says this: “If Chaon’s 2001 novel, Among the Missing, which was nominated for a National Book Award, contained some of the best fiction written in the past 20 years, Stay Awake is its darker, more unsettling cousin. These stories are defined by disturbing unreliability, with just enough room between the characters’ memories, like the space between trees in a dark forest, to slip through, get lost.” [Note to self: include lines like this in future book reviews so that other people will quote them.]
Publication date is February 7, 2012, from Ballantine.