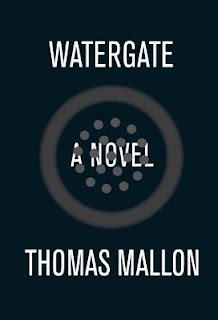 The last of Thomas Mallon’s historical novels I read was Fellow Travelers, an excellent story set during the McCarthy era. Now Mallon has another Washington novel, about another political mess: Watergate

For all the monumental documentation that Watergate generated—uncountable volumes of committee records, court transcripts, and memoirs—it falls at last to a novelist to perform the work of inference (and invention) that allows us to solve some of the scandal’s greatest mysteries (who did erase those eighteen-and-a-half minutes of tape?) and to see this gaudy American catastrophe in its human entirety.

In Watergate, Thomas Mallon conveys the drama and high comedy of the Nixon presidency through the urgent perspectives of seven characters we only thought we knew before now, moving readers from the private cabins of Camp David to the klieg lights of the Senate Caucus Room, from the District of Columbia jail to the Dupont Circle mansion of Theodore Roosevelt’s sharp-tongued ninety-year-old daughter (“The clock is dick-dick-dicking”), and into the hive of the Watergate complex itself, home not only to the Democratic National Committee but also to the president’s attorney general, his recklessly loyal secretary, and the shadowy man from Mississippi who pays out hush money to the burglars.

Praised by Christopher Hitchens for his “splendid evocation of Washington,” Mallon achieves with Watergate a scope and historical intimacy that surpasses even what he attained in his previous novels, as he turns a “third-rate burglary” into a tumultuous, first-rate entertainment.

The book has a publication date of February 21.

Edited to add: there’s a review of Watergate in the Washington Post (H/T Maggie D.)