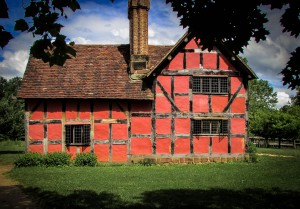 A couple of weeks ago I was contacted by Governor Terry McAuliffe’s office to see if I would be interested in serving on the Board of Trustees of the Frontier Culture Museum of Virginia. Earlier in the summer I’d considered putting my name forward for some kind of appointment, and the FCM was on my list. I just got busy and didn’t get around to it. So the call was welcome and I did not hesitate to accept the appointment, which became official yesterday with the Governor’s announcement.

To be honest, prior to the appointment I hadn’t been to the museum in years, although I had taken groups of visitors there in the past. But the afternoon I got that call, I went over to the museum and gave myself a tour. I loved it! If you haven’t been, check out the website and then come to Staunton to visit in person. It is a living museum with exhibits from the Old World–including an Igbo village and farms from England, Ireland, and Germany–and the New World–including a native American settlement and American farms from the earliest days to the 1820s and 1850s. And expansion continues with the addition of a church and a small town.

I’m not sure what I’ll be able to contribute as a member of the Board of Trustees, but at least I can encourage others to take advantage of this relatively unknown gem.