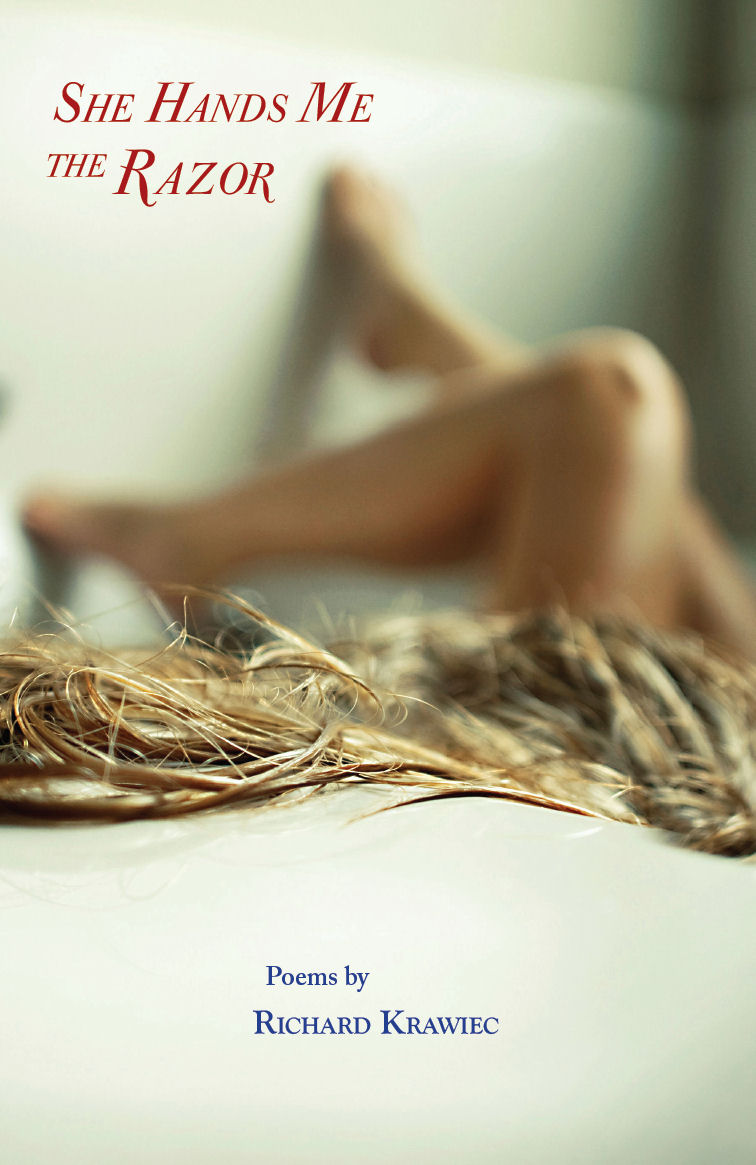 Richard Krawiec, author of She Hands Me the Razor

There’s often a disjunct between what a writer believes is their best work, and what an audience thinks. For a poet, the difference can be one of appreciation for craft or subject matter, or connection on an emotional level. When my collection She Hands Me the Razor was published by Press 53, there were certain poems I knew would go over well in a reading. The title poem, with its exploration of the nature of love as revealed in the act of shaving a woman’s leg, I was certain would draw readers in, and it did: “it is always a matter of finding/another’s boundaries/one’s own limits…”

I was less prepared for the opening poem, “Young Love,” to be as well received as it has been. I like the poem, but didn’t consider it one of my most finely crafted. I placed it first because the structure of the book, a novelistic journey through love, loss and redemption, required I open with the “youngest” poem I had, a first chapter of sorts, so I could move forward chronologically. This was the most youthful poem I had on the theme of love, dealing with that experience of early passion when love was believed to be “a run/of rolled 7s/luck we never/thought/would run out.” I was unprepared for how many people connected with that, how accessible audiences would find the poem’s experiences. Accessible, and resonant.

Conversely, I was surprised at how silent the response whenever I read “There Will Always be a Father,” a poem that explored through the life trajectory of a narrator, how the absence of a father can spin a life out of control, can be a kind of execution: “the sharp, shining blade of a guillotine/a baggie full of rainbow pills/empty vodka bottles tipped across countless counters…” Nice rhythm, music, images – and silence.

I was determined to continue reading that poem, which I thought one of the strongest I’d written, until, at A Gathering of Poets, Press 53’s annual day of workshops, Betty Adcock told me afterwards, “That poem was good.”

I also noted she said nothing about the other, more accessible poems. Her praise allowed me to realize not all poems are equally accessible. That doesn’t mean you write down for an audience, although some do. I believe everything you write should be the best you can possibly do with that particular material. But some poems draw readers in by emotionally engaging them.  Other poems are more appreciated intellectually, for their craft.

What you hope is to write work that is both accessible and worthy of reflection, as, I believe, I was able to accomplish  in the closing poem, “Approaching Grace”: “I approach grace by watching/the feral curl of white froth/rising sun, chanting woman/the red infusion of morning light/on my lover’s already glowing face.”

RICHARD KRAWIEC has published two novels, a collection of stories, four plays, and a chapbook. He has won fellowships from the National Endowment for the Arts, the Pennsylvania Arts Council, and the North Carolina Arts Council (twice). His poems and stories appear in Sou’wester, many mountains moving, Shenandoah, Witness, West Branch, North Carolina Literary Review, Florida Review, Cream City Review, and dozens of other magazines. His feature articles have won national and regional awards. He teaches online at UNC Chapel Hill, where he won the 2009 Excellence in Teaching Award. He is the founder of Jacar Press, a Community Active Literary Publisher.