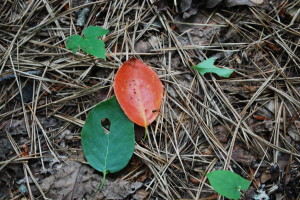 Monday: I needed a coffee-shop fix morning so I worked in the studio for a little while and then drove down to Ingles where there is a Starbucks in a grocery store. The coffee is more or less the same, but the atmosphere certainly is not, and the wifi is iffy. Nonetheless, I got some emails sent and surfed the ‘net for a bit before heading back to get to work. Got a lot of words in the afternoon and I was thinking of going for a walk, but it rained, so I kept writing. After it cleared, I walked over to the Rock House for a bit of email.

Tuesday: Did some work in the morning—wrote about 1500 words—then went over to the Rock House for Internet. I needed something from the grocery and also wanted to check out the bookstore in downtown Clayton, so I took a little road trip. It’s a nice little store, and so I bought a book I didn’t need. No surprise there. There are lots of antique and gift shops on the Main Street, but I didn’t go into any of them. Three new people arrived, two from Atlanta and one from Philly, so it was fun to meet them. I’m wondering why men are in the minority at residencies and conferences these days, and MFA programs too, I suspect. Right now we have 8 people, only 2 males. Not enough applications from men? And why not? Do men not need residencies? It started raining during dinner so getting home was a little wet.

Wednesday: I’m feeling the end approaching! But the writing went really, really well today. I guess I shouldn’t jinx it by saying so, but I liked what I was doing and wrote through the climax and end of Act II today, over 3,000 words, which I almost never do in one day. Tomorrow I’ll begin on Act III, but I think I’ll kick back now. I went for a great walk—up hill on the Hambidge Trail, then connecting to Owens North and the Durett spur. Ran into Stephanie—the first time I’ve seen another human on these Hambidge Trails. I continued up Owens Trail North until I got to . . . North Carolina. Then turned around and came back. Down near the Gallery I ran into Stephanie again and while were standing their talking, a doe and her very small fawn walked into the driveway. They stopped long enough for me to take their picture and then were on their way. Sweet.

Thursday:  In the morning the work went well. I wrote about 2000 words and that brought me to the end of the book. I won’t say the end of the draft, though, as there are major sections missing, and, after tinkering with what I’ve got tomorrow, next week I’ll begin to fill in the gaps. I’ll be at 40,000 words when I leave here, and my goal is to have a draft of maybe 70,000 when I leave for Ragdale in late October. After lunch, I took the afternoon off. I drove down to the Foxfire Museum at Black Rock State Park. I’ve heard for years about the Foxfire books, and Rabun Gap is the place where it all started. There are now 12 volumes in the series. At the recommendation of the clerk at the museum/gift shop, I got Volume 1.

Friday: A rainy morning, good for getting work done, and so I exceeded my goal for this residency of 40,000 words. I started going back to the beginning and making some notes about what else needs to be done, but I kind of want to let it rest for a few days, so I think I’ll not do that. Instead, I started outline a non-fiction project I’ve been thinking about. And then there’s a short story I started last fall that I could work on. So many options! (I did in fact work on that short story. I added 1300 words to the 900 I already had and it’s now done. This residency thing is amazing.)

Saturday: My last workday, but I’m not sure I want to work. I’m going to save packing and cleaning for Sunday morning. I will open the Scrivener file for the novel, though, as there are some metadata things I can do there, character sketches to reflect what I’ve been doing in the text, etc. I’m going to post this before the day is really done. Tonight is the Artists’ Talk, when the community is invited to come to the center to listen to us all talk about our work. I think 7 of us are presenting, so it will be a long evening . . .

And then tomorrow, Sunday: On the road home.