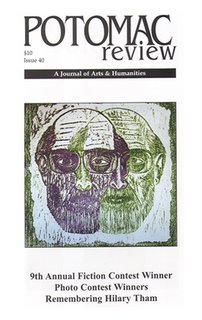 I’ve been a fan of the Potomac Review for a while, and not just because I was a finalist for their Fiction Prize a couple of years ago. It is currently undergoing a change of editorship, from Christa Watters to Julie Wakeman Linn, associated with its move to Montgomery College. Subscribers will have received a letter from the new editor, talking about staff experience at Bread Loaf, Sewanee and VCCA (does that mean I should put all those things in my submission cover letters to them?), and a new look promised for Fall 2006. Although the editors aren’t explicit about this, it appears that the journal becomes an Annual beginning with the next issue. It will be interesting to see the changes.

In the meantime, Issue 40, Fall/Winter 2005-06 recently arrived. It is a packed issue, but not one that excites in most of its contents. There is one standout piece, though, an essay by Margaret MacInnis called “Days Before Seatbelts.” (The TOC lists it as fiction but Margarate, a friend of mine from our Queens University MFA Program and also from VCCA, assures me that this piece is an excerpt from her memoir of her father.) Here’s a sample:

“He stood on the causeway wall, barefoot, his back to me. From the hood of our 1974 black Grand Prix, I was close enough to see how the frayed edges of his cutoff Levi’s were beginning to unravel. The mass of freckles on his back fascinated me, and I studied them, too. Although we shared the same fair complexion, I did not have such freckles. I had asked once about his freckles, why he had so many, and he explained that as a boy he had gotten one too many sunburns while hanging out on the causeway or the stone wall at the dam. It wasn’t good for children to burn, he said, and the first thing he’d done that afternoon, after I’d put on my bathing suit, was rub a coconut-scented lotion on my back, shoulders and the tip of my nose. When I asked if I should do his back, he had shaken his head no.”

It’s a beautiful piece of writing.

Next up: North Dakota Quarterly