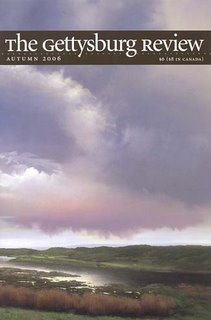 The Autumn 2006 issue of The Gettysburg Review is quite good.

Don’t be surprised if you hear in the course of the coming year that “Sextet” by Christine Benvenuto has won a Pushcart Prize or an O. Henry or been selected for BASS, or if not that then some other work of hers has been honored. “Sextet” is a terrific story, about Leila and Rafael, who become acquainted with two other married couples in their New York apartment building. But Leila and Rafael are not rich, their apartment is small, they have four children, they want to go to Israel, consider themselves “egregious Jews,” have real problems (Rafael is being treated for cancer), while the other couples have only one child each, are barely Jewish, find much to complain about, and are rich enough that they seem to exist on a different plane. The portraits of the six characters are wonderful. Here is just a bit about Carter, the husband in one of the couples:

“Tall, blonde, and boyish, Carter was, or liked to give the appearance of being perpetually in a state of tall, blonde, boyish befuddlement. He wore tailored Brooks Brothers shirts at all times, didn’t own a single polo much less a T-shirt, and only dressed down to the point of short sleeves and no tie in hot weather. Rather than aging him, his wardrobe contributed to the image of a prep-school adolescent. Periodically he liked to rise to the surface of his boyishness, as it were, and make pronouncements, which he would follow up by throwing back his head and laughing, irresistibly charming everyone.”

The story is mostly told from Leila’s point of view, but, startlingly, the author occasionally jumps into an omniscient voice. It’s a surprising technique that appealed to me, and allowed the reader to see what Leila could not know, although I think the narrative would have worked fine without the shifts. I also have one small quibble (that is, apart from the author’s use of “alright,” which I tried hard to ignore) and that is that some of the time shifts—we learn snippets from the relationships of the 3 couples, but not chronologically—were a little confusing. But otherwise, this is a story that that should hold the reader’s close attention, with an ending that seems just right, and I predict will receive a fair amount of attention.

Chris Offutt has a fine story in this issue (“Cutting the Gut”), and there’s an interesting story by Stephen Tuttle (“Rosenvall’s Cage”) that is notable for its syntax, in that it is told in the present progressive: “There’s Haggarty saying that he knows of a girl who . . . saying she is exactly . . . Rosenvall, sweating.”

Another fine story is Kathleen de Azevedo’s “Behold My Son Issac,” about poor Abraao whose wife Sara dies on a bus while they are going to the city in search of work. And of course in keeping with the biblical allusion, we have the obligatory: “Abraao brought the knife up his son’s neck, hesitated, and with one deep breath, took one of Isaac’s curls, sliced it off, and let the hair blow away, just as he had done with Sara’s. Then he cut off another curl, and it also flew away. His son lay his head on his father’s lap as the knife sawed through his hair. Abraao continued cutting , slowly, until he could see the boy’s neck, then more, until his hair was an uneven bristle.”

At first I was troubled by Sandra Novack’s “White Trees in Summer” because of the shifts in point of view. The story begins in Viktor’s point of view and we learn that his wife has recently died. His house has been toilet-papered for no apparent reason and he suspects a couple of the neighborhood teens. We shift then into Trish’s point of view and learn that her boyfriend has it in for Viktor because he suspects Viktor of having killed his wife. And then there are more shifts back and forth. Ultimately, although the shifts are unconventional, I found them necessary to what Novack was doing—telling two stories. There is little except proximity that binds these characters, and yet their stories are intertwined and the author has neatly shown how.

The last piece I’ll discuss from this issue is Margaret MacInnis’s “Red.” (Margaret is a friend from both the Queens University MFA Program and VCCA.) In this essay, which I assume is excerpted from her memoir, Margaret recalls as a child being introduced to nail and toe polish by the girl with whom her father was then sleeping and the conflict that exposed between Margaret and her mother: “While Cindy and I sat at the kitchen table waiting for our nails to dry, my mother pulled into the driveway, honking long and hard. I moved quickly She had warned me not to make her wait. ‘Thanks,’ I called to Cindy as I ran out the door. Inside the car I slid by hands under my thighs. As we backed out of the driveway, I looked up at Lucy standing alone in the window, smiling and waving good-bye. When I waved back, my mother shrieked, ‘What the hell is on your nails?’”

In addition to all the fine writing, I was entranced by the cover and the work included in these pages of Tula Telfair, who paints meaningful skies, to oversimplify.

Next up: more One Story.