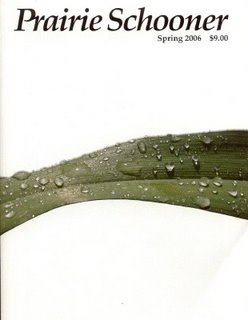 Is it just a coincidence that the Spring 2006 issue of Prairie Schooner leads with a story by R.T. Smith and also has a portfolio of 5 poems by Sarah Kennedy? (Smith, the Editor of Shenandoah, and Kennedy, the Book Review Editor of Shenandoah, are married.) Whether it is or not, their contributions are arguably the highlights of this issue.

Smith’s story is called “Story” and involves a man, Orin, a retired teacher, who is sitting on his patio with a view of the mountains, trying to read a pretentious short story in The New Yorker when he realizes that there is an intruder in the house. (An oddly obedient intruder, it must be said, who reveals his name without apparent deception or reticence. When Orin asks, “Who are you?” he answers: “Mickey. Shut up and sit down.”) Then comes this:

“As the man took a step towards him, Orin couldn’t see any other options, though he quickly calculated whether he could reach the stairs and rush up for the empty handgun under the mattress. He had been swift enough when he was young, athletic even at forty, but the chemo and radiation had left him diminished and timid. Fifteen push-ups were a strain. A mile walk left him winded. The intruder was lean, raw-boned, poised.”

So this is, in part, a cancer story, but like the cancer story in the current Small Spiral Notebook, that’s only part of what’s at stake, because while the intruder is deciding what in the house is worth stealing, Orin is doing his own review of his life and what is valuable to him in his marriage.

Kennedy is known for her poems derived from history—historical poetry, as opposed to historical fiction—and these provide nice examples. Here is an excerpt from “Mary Owen: Home Remedies, 1712”:

Her almond macaroons, proven to plump
the flesh, tempted the most withered consumptives,
and who could refuse a taste of her cowslip wine,
famous for bringing color to a pale cheek?
Her liquorice cakes could cool a fevered throat.
Copied from a royal receipt–Queen
Elizabeth Ever Caryd Some of these

about her–they never failed to stop
even the vigour of a most violent cold.
For lifeless hair she prescribed a wash
of fresh rosemary and ale, for St. Anthony’s
Fire, adder’s tongue juice in fresh cream.
all found relief in the home of Mary Owen,
no body, however plagued, was turned away.

In this issue I also liked “For Sale by Owner” by Kathryn Ma, about a Chinese family living in Philadelphia in the early sixties, planning a move to California where, the father feels, they’ll be more comfortable. Ironically, though, although the parents perceive themselves as separate, they are the ones, the mother in particular, who discriminates against her son’s black teacher.
“A sign has gone up in my classroom, too. My teacher, Mr. Franklin, has covered the big black-rimmed IBM clock with a poster that says, “TIME PASSES, WILL YOU?” So we can’t see how long till recess or lunch or the end of the day. Mr. Franklin is a Negro. My mother isn’t happy about that.
But I can’t take my eyes off Mr. Franklin. He’s a big man, with broad shoulders and large hands that are very pink on one side. His fingernails are clean and smooth. He wears a gray suit or a brown one, with a skinny tie and a silver tie clip. The tie clip looks like my father’s, except it’s plain where my father’s is marked with a symbol which he told me means that he’s an educated man.”