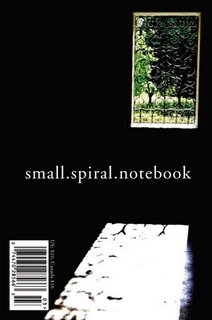 Volume II Issue 1 is the first issue of Small Spiral Notebook I’ve seen, although I’ve been hearing good things about the magazine for some time. It’s visually attractive, slim (just 125 pages, although densely printed), and one of the first things I noticed was that SSN, like Golden Handcuffs Review (highlighted here last week) does not justify its pages. Is this a trend that I’ve missed?

I enjoyed a great deal about the work in the magazine, but I’ll focus on just a few of the pieces.

First, Paul Yoon’s “So That They Do Not Hear Us” is beautiful. Paul, who was on social staff when I was at Bread Loaf last summer, has appeared in a number of fine publications lately, and this is another good story. Like some of his other stories, this one is set in the Korean island of Cheju (which is probably another reason why I’m drawn to his work—when I was a Peace Corps Volunteer in Korea in the ’70s I spent a fair amount of time on that island, first to teach in a workshop and then, attracted to its slow pace and beautiful beaches, to rest and relax). Here we focus on Arina, one of Cheju’s diving women. There are several fabulous passages, but let me quote just one, from near the end:

“It was her father who once said, before he left, that pilots, while in the air, held their breaths. Up in the mountains they had been watching the American planes cut clouds, their wings like glass, luminous. Contrails like veins. She asked her father why they did so. Because of whom they are seeking, he said. Superstition. For luck. So that they approach in silence. She thought then of the air machines, their engines all of a sudden empty and dimmed as they soared over the island. Her father pressed his fingers to his lips. He was in his early twenties, only a boy. But we hold our breaths as well, he added. So that we move quickly. So that they do not hear us.”

Next, I also enjoyed “It’s Really Called Nothing” by Shari Goldhagen. Cancer stories are tough to pull off, but this one does a decent job of avoiding sentimentality by keeping its focus on the protagonist’s mid-life-crisis, if that’s what it is, or in any case the marital malaise he’s suffering. I really was touched by Jack’s love for his sick brother, Connor, and appalled by Jack’s indifference toward his wife. The author gets the Chicago legal world right, although I found the behavior of the brilliant and beautiful first year associate to be more than a little implausible. Still, it was a compelling read:

“He forgets he was supposed to call Mona until he’s back in Connor’s room, where his brother sleeps again. Laine lies next to him, curled on her side, eyes closed. Both of them have gotten so thing since Connor got sick, as if they’re evaporating into clouds of Connor’s wet breath.”

Lastly, probably my favorite piece in this issue is “The Girls” by Ladette Randolph. Becca has taken a housesitting assignment that includes, in addition to caring for a rare orchid, watching “the girls,” the homeowners two dogs, Hetta, a Pug, and Desdemona, a Boxer. They’re all a bit wary at first but then they relax and get used to one another, until Becca’s unreliable friend Leslie Ann comes into the picture.

“In the late afternoon, as the sun began to set, the house felt cozy and warm. The dogs were napping, and Becca wandered toward the orchid room to check on the orchid. In the dying sun, the flower seemed to radiate. It was an amazing sight, and Becca sat cross-legged on the floor outside the room just to watch. Later, when she realized the house was very dark, she couldn’t account for how the time had passed or what she had done in the duration.”

I’m not sure I was thrilled with the story’s ending, but it was a tense and fun read.

Next up: Southwest Review