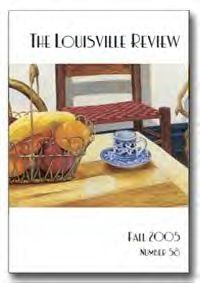 The Louisville Review is affiliated with the low residency MFA Program of Spalding University (the editor is the director of the program, Sena Jeter Naslund), and the Fall 2005 issue includes pieces from no fewer than four writers connected to the program (graduates and faculty). Not that there’s anything wrong with that, I suppose, but it does suggest that the rest of us may face tougher odds when submitting to this magazine.

There were a few pieces I enjoyed in this issue, including Eric Schramm’s “The Deer”:

“An undulant force.
I want my body to move
with such a fluid stride—
muscles shimmering like water—
with the same fury of this deer
hurtling along the highway.”

Of the four short stories, there were two that I enjoyed. In Audrey Petty’s “Bat Season,” a couple takes a vacation trip to Saginaw and stays in a rented house. A bat invades, sending the couple running to a hotel, and introduces some excitement into their lives. This is a story that ends with a twist, but it’s not unsatisfying. Brenda Sparks Prescott’s “The Nuclear Family” is dark, in that it involves a woman whose father stayed behind in Japan out of loyalty to the emperor and died in the atomic blast.

The essay “Jump” by Kathy Hayes was a standout, or at least it was entertaining. It recalls both the author’s youthful parachute jump and a coming-of-age leap off a bridge by her son.