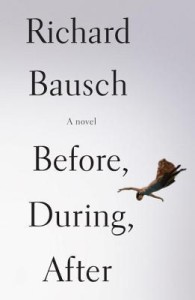 Tomorrow, August 12, is publication day for Before, During, After, the new novel by Richard Bausch, his 20th book of fiction (or something like that–is there a point at which you stop counting?).

On Saturday evening, I crashed the party, so to speak, at the inaugural Virginia Quarterly Review Writers’ Conference in order to hear Dick read. (Not really. The reading was one of several events during the conference that was open to the public.) It was good to see him and also to see the good folks at VQR. It looked like they had a decent turnout for their conference. Maybe next year I’ll attend the whole thing.

Bausch’s reading was preceded by very short readings by a few of the conference participants, but he was certainly the main event. He started by reading just two short excerpts from the book–both set on September 11, 2001: One from the point of view of Natasha, who worries about her husband in NYC when she hears the news, and one from the point of view of the husband as he is fleeing the city after the World Trade Center has fallen. Dark stuff, but then Bausch often is quite dark in his work, and that’s one reason I’ve always admired it. After the excerpts, he read a full short story, “The Knoll,” which I gather is part of a new story collection that is forthcoming. It’s a powerful story. (He pointed out that younger readers may not understand that the title is a reference to the Grassy Knoll or, for that matter, what the significance of that is.) Anyway, I’m looking forward to reading the book. I reviewed Bausch’s last novel, Peace, and you can read that review here: Book Review: Peace by Richard Bausch.

I first met Dick ten years ago. I had recently graduated from my MFA program and I was attending the Sewanee Writers’ Conference for the first time, hoping to figure out what to do with my draft novel, the hot mess that had been my thesis. It was long and “ambitious,” which is code, I’ve come to learn, for too complex for my abilities. I was wowed by Dick in the workshop, and he and Jill McCorkle made a great team–funny and smart and dedicated writers and teachers. I don’t remember much about comments I received in that workshop on my novel, but I do remember that Dick suggested I split the book into two and work on the part that most interested me. I saw the merit in that suggestion, and proceeded to spend several months extracting one of the threads of the book to create a separate novel. My plan was to use the remainder for a sequel, and I even envisioned a third book (because a trilogy sounded better and sturdier than a pair). Ambitious!

Although I completed the book, I guess it wasn’t very good, because I wasn’t able to get an agent for it and so no publisher. The trilogy idea languished. I concentrated for a few years on short stories, instead, and that led to the publication of both of my books. But now that I’ve been working on novels for several years, I have thought about returning to that failed novel attempt in order to resurrect it. My writing is much stronger now, and I think I have a better understanding of plot and character. So it is an interesting coincidence that just as Dick Bausch comes to town, 10 years after he changed the direction of that old novel, I’ve started thinking about it again and have sketched a rough outline of how it would develop.

What will come of it? I’m not sure. I’m in the middle of another book right now and have a second project that is also pretty far along. I’m torn, though. It would be great to give that book life.