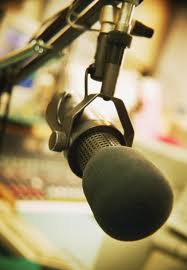 I just did my first radio interview. I’ve done podcasts and blog-talk internet “radio” before, but this was the first time in a radio station, sound-proof booth, the works. It was fun!

As with so much of my current exposure, the impetus for this interview was my Library of Virginia Award, which was announced a month ago. It helped, I have to say, that I know the interviewer–Martha Woodroof, of WMRA (the local NPR affiliate)–and so I was perfectly comfortable sitting down with her to have a conversation about writing. (Martha is a novelist herself–her debut novel comes out next year–and we’ve met a few times to do just that.)

We chatted about my legal career, how I got started writing, the process of publishing, finding out about the Award, etc. The time went by fast. The only time it felt at all odd was when I paid attention to the microphones between us. I was looking at Martha as we spoke, but that meant that I was looking through a tangle of microphone infrastructure. A little strange.

I don’t know when the interview will air, but I’ll be sure to spread the word.