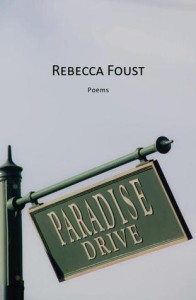 This book won the Press 53 Award for Poetry. A collection of modern sonnets, it explores the trials and tribulations of Pilgrim, a name selected, Foust tells the reader in a note, because Anne Dudley Bradstreet, the first woman poet to be published in both England and America, was among the Puritan immigrants who arrived on these shores in 1630.

The poems are not then about Bradstreet, but about a woman who is also a seeker, one who is, perhaps, under some of the same puritanical constraints. But this Pilgrim lives in Marin County, which is another sort of colony altogether:

It hit her like a double bolus of morphine.
Her problem was ennui. Envy of ENVY.
Pilgrim wished she could, but just did not care.
Not about shoes, blow-dried hairdos,
ins to swank parties, flat stomachs and house lots,
toddlers locked and loaded on Harvard,
sugar in schools, or Land Rovers. v. Escalades.

These are poems worth reading again and again, which I will do, certain that there was much I missed the first time around.