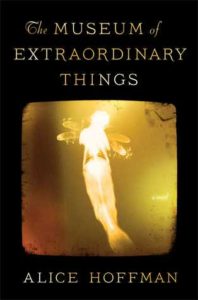 The Museum of Extraordinary Things by Alice Hoffman

I listened to the audio version of this book, which I didn’t like much. This was in part due to the breathy narration by Judith Light, whom I’ve admired in television programs, but was mostly due to the overwritten, over-wrought nature of the book itself.

Set in 1911, the story begins with some potential. A “professor” from France has opened The Museum of Extraordinary Things, a side show of freaks and oddities on Coney Island. He attempts to incorporate his daughter Coralie, born with webbed hands, into the exhibits, with mixed success. Meanwhile, Eddie Cohen, who has run away from his father to make his own way as a photographer, is asked to find a girl who has been missing since the Triangle Shirtwaist Factory fire, one of two fires that bookend the plot.

If the romance between Coralie and Eddie hadn’t been so sudden (“I knew in that instant that I loved her”) and unbelievable, I might have been more interested in the intersecting stories. But also the descriptions–the two fires, the woods where Eddie finds solace, just about everything else–was so overdone that it was hard to stick with the plot.