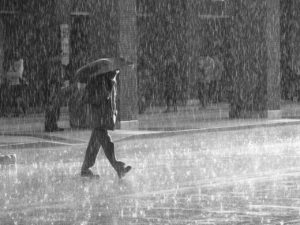 1. At a little after 3:00 am this morning, I awoke when I heard the various beeps that accompany a power outage: the CO detector, the power backup for the computer, etc. Frequently, the power comes back on in seconds and all that needs to be done is reset the clock on the microwave. But the power stayed off and the UPS continued to beep. It was annoying, but the UPS is in the office upstairs and I didn’t feel like getting up to deal with it. Plus, I was curious about how long the UPS battery would last. I did get out of bed long enough to get my tablet, and I logged on to the power company’s website to report the outage (fortunately, my modem is powered by the UPS, so I still had WiFi). I learned that about 350 households were affected by the outage. Nothing to do then but try to get back to sleep. Beep. Beep. Beep. (The UPS gave up after about 2 hours.) At 7:00 am, new beeps signaled the restoration of power. I got up to face the day, which promised to be rainy and gloomy.

2. Today is the Royal Wedding, about which I care not. I do like Meghan Markle, however. I have watched the show she’s on, Suits, on Amazon Prime, and I like it very much (mostly because of the law firm setting that brings back memories). She’s talented and beautiful. Also, she went to my alma mater, Northwestern, so there’s that. And she seems to be shaking up the royal family in several ways, which is all to the good. I hope they’re very happy.

3. The title of this blog post is in French because I’ve been doing daily French study in preparation for a five-week stay in France later in the year. I’ve been to France before and spoke very little French, but because this is a longer trip I thought I should make the effort. Also, it’s fun. I’m using Duolingo plus an online flashcard-based vocabulary builder, and I’ve started meeting weekly with a friend to practice speaking. We meet at the French bakery in town and I’m tempted to order in French–Donnez-moi un croissant et un cafe noir, s’il vous plait–but they’d probably think I was nuts.

4. The New York Times is offering tips for decluttering, which are mostly what you’d expect but because they are spaced out over a few weeks, it seems to be really helpful. So far I’ve only decluttered my bathroom, but the bedroom is next. That’s a much larger challenge.

5. I’m reading several books, and I plan to spend part of this rainy day with a couple of them. On the one hand, I feel like I should be cleaning or fixing or cooking or something, but . . . books!

6. Last night I went to the American Shakespeare Center to see Sense and Sensibility again. The play is an adaptation by Emma Whipday of Jane Austen’s novel, performed by the ASC’s touring company, which is in residence for the Spring season. All four of their productions are excellent and this one is especially good. The theater was nearly full–on the first level, anyway–which is a pretty regular occurrence these days.

7. I’m unlikely to get any writing done this weekend, other than this blog post, but I’m about to launch into a revision of a novel that I once thought was done. I recently received some very thoughtful comments from an editor and so I believe I know what needs to be done with this manuscript, which is exciting. I wish I could hide away for a couple of months to really focus on this project, but that isn’t possible. I do hope to stay off social media–during the day, at least–to give myself the best shot at finishing my revisions by the end of the summer.