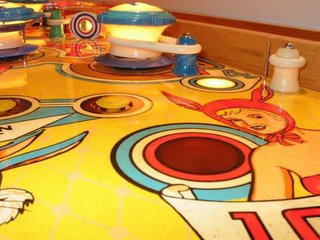 Um, I mean, Wizard. When I was in college, I was addicted to pinball. And it had nothing to do with Tommy—I didn’t even like The Who and I don’t think I had any of their albums. I just liked to lose myself in the ping of the points mounting, the bumpers chiming and, especially, when the required total was reached, free games being awarded with a satisfying thunk. There were three machines in the game room at the student union—Norris Center—and I could easily spend an hour or more at the machines, before class, after class, instead of class. Used up a lot of quarters that way . . .

During the Winter break between my first and second years teaching in Korea, I traveled around Japan with a couple of my fellow Peace Corps Volunteers, Bill and Laren. I don’t now remember what city we were in—Osaka maybe?—when we stumbled upon a district of Pachinko Parlors. Pachinko is a cross between pinball and a slot machine. The idea is to start out with an allotment of ball bearings—miniature pinballs—launch them through the Pachinko maze (which is upright instead of flat) and if you are lucky and the balls fall in the right way then you are rewarded with more of the little balls. You can keep playing, or you can cash in. I remember that I ended up with a huge number of the things, which the parlor exchanged for a bundle of ballpoint pens. Huh? I spoke no Japanese and although Laren spoke some this dilemma was beyond him. We didn’t need 50 pens and I guess that was evident on our faces. We were directed down an alley behind the parlor and guided to a blacked out window with only a slot in the middle open. We passed our pens through. Out came a wad of Yen. Cool! Illegal Pachinko winnings! Good for a little beer, as I recall.

These days I settle for pinball software on the computer. The sound and feel is remarkably close to the real thing. One can even jiggle the table by using certain keys on the keyboard, although even back in college I rarely did that—it felt like cheating. (Never mind that I was skipping Intro to Ethics to be there . . .) There are several tables available in the program I have. The table I’m currently playing is pretty low-tech and dates from the ’60s: Slick Chick. The picture above, by the way, is from something called the Internet Pinball Database. (I’m sure there’s a good reason for the database to exist, although I can’t think of one off hand.) There is a flaw in the Slick Chick program, however, which causes the ball—in all other ways behaving like a real steel ball hitting real rubber bumpers and flippers—when it rolls at a certain high speed to actually pass through the flipper instead of responding and bouncing up. It’s annoying in the heat of the game, but it raises some fun epistemological questions, no?

Or not. But the point of this whole discussion is that I waste too much time on video games, on email, on various other distractions (including blogging?) and have come up with a solution to limit my time-wasting during hours when I am supposed to be writing: I’m going to charge myself a quarter. I’ve placed a large beer mug on my desk (I’ll look for a piggy bank to replace it soon) and for every pinball game I play (except for legitimately earned free games, of course), I’ll chuck a quarter into the mug. For every time I check my email during writing time—a quarter. If I don’t have a quarter, that’s too bad—I’ll have to wait. To make this interesting, I pledge to contribute the proceeds to the Lance Armstrong Foundation.

By the way, posting this cost me a quarter.