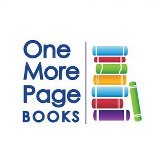 Last night, April 3, I had the pleasure of giving a reading at One More Page Books in Arlington, VA. It’s a very nice little store run by some of the friendliest booksellers around. If you’re in the area, stop by and take a look at their excellent selection of books. (It’s an easy walk from the East Falls Church Metro stop.)

I’m never sure what to expect from readings. Sometimes no one shows up. Sometimes a couple of people are there by accident. Sometimes you get a crowd. Last night was on the crowd side, I’m happy to report, although the crowd was made up entirely of people I knew, which was kind of amusing. Not a single complete stranger. They were all there because they received an email from me or got my Facebook invitation. The store did publicity and there was a notice in the Washington Post, but in the end it was my own outreach that created the audience. Lesson [re]learned.

Since I knew everyone, I didn’t have to say much about myself, although the store representative gave an embarrassingly long intro. I talked a little about how my two books came about, and then I read the opening pages of “The Replacement Wife,” one of my favorites to read because there are a couple of good “cliffhanger” spots where I can stop.

Then there were lots of questions, which kind of surprised me. But eventually the store wanted to wrap things up and they said it was time for me to sign some books. Which I did.

Great fun all around. Thanks to Terry, Sally, Lisa, and everyone at One More Page Books, plus all my friends who came out last night.