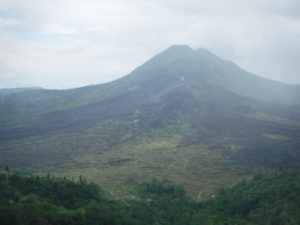 It remains to be seen how relevant Bali is to my project, but it is at least tangentially important, so that was my reason for visiting. This was my fourth trip to Bali in 39 years, each one very different.

The first time I came here was on my backpacking trip in 1978 after the completion of my Peace Corps service in South Korea. Getting to Bali was quite an ordeal back then, at least the way we did it: boat from Singapore to Jakarta (which itself was a pain, involving a ferry to a nearby Indonesian island, then waiting overnight for the larger passenger ship, for which we had paid “deck class” allowing us to sleep on mats on the deck); a bus to Jogjakarta (which I loved); a train to Surabaya; then a ferry to Bali. I don’t remember where we stayed, but I think it was in a cheap hotel near the Nusa Dua beaches. I remember it being uncrowded and idyllic.

The next time I visited Bali was at Christmastime in 1988, more than a decade later. That was different because I was living in Singapore at the time and earning plenty of money as a lawyer, so travel was no problem, but I was meeting up with a friend who was backpacking, so the accommodations were still pretty primitive. We stayed, I think, part of the time in Ubud, the arts city in central Bali, and part of the time on the black sand beaches of the east coast. That was also a pretty good trip and because my buddy was more of an adventurous traveler than I, we some pretty interesting things (a tooth-cutting ceremony, a cremation, etc.)

The next time was five years later as I was preparing to move back to the US and make a big career change. The Four Seasons had just opened a resort on Jimbaran Bay and I was able to get a villa for a reasonable price. Luxury! I didn’t leave the resort. 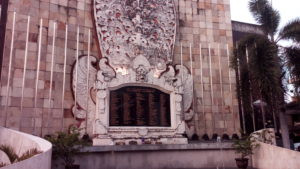 But this time I chose Kuta, which is the most crowded, noisiest, nastiest part of the island. My resort was fine–beautiful gardens and right on the beach–but stepping out into the “town” was not enjoyable. But I picked it because of the terrorist bombing that occurred in Kuta in 2002, killing over 200 people. Shown here is a picture of a memorial to the victims. (That’s the part that has a connection to my book project.) 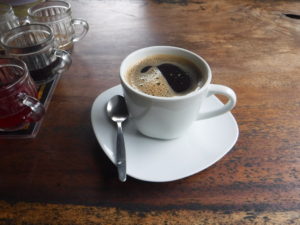 But beside that, I wanted to do some things I had not done on my earlier visits, including a drive up to Kintamani, which is the viewing spot for Gunung Batur (pictured above), Bali’s active volcano. Along the way, we stopped in Ubud, which feels more commercial now than it used to, but still I enjoyed visiting a family’s painting studio and gallery as well as a cooperative woodcarving studio. And then there was the visit to a coffee plantation where I tasted several different flavored coffees and herbal teas along with a cup of coffee luwak, the famous Bali coffee made from beans “harvested” from civet cat poop. Can’t say I loved it, but at least I gave it a try. We also stopped at some terraced rice fields, but that wasn’t anything more than a photo opportunity. 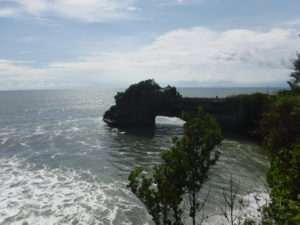 The last part of the trip was the most disappointing–a visit to Tanah Lot, a temple on the west coast that I thought was going to be a spiritual experience. Wrong. It was crawling with tourists, not to mention shops selling junk to those tourists. One is supposed to watch the sunset there, but we left long before that.

I think I regret my decision to stay in Kuta. Bali is a beautiful place, but Kuta is simply overrun. If you get a chance to visit the island, try for someplace undiscovered, or at least off the beaten path.