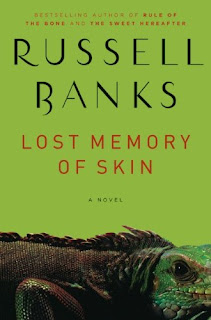 Lost Memory of Skin
Russell Banks
Ecco, September 27, 2011
As difficult as it is to have sympathy for this novel’s main character—the Kid is a porn addict and convicted sex offender—it isn’t at all difficult to become thoroughly caught up in the memorable story that revolves around him. After all, there’s talk of pirates and buried treasure, there’s a hurricane, there’s a secret agent (or double agent), and there’s an adventure in a Florida swamp. What’s not to like? Along the way, there’s a discourse on knowledge and truth, on believing and knowing, and on the reinvention of self.
As with Banks’s previous work, this book takes some inspiration from another great work of literature. The Rule of the Bone borrowed from The Adventures of Tom Sawyer. Cloudsplitter bears some resemblance to Moby Dick. Banks had Shakespeare’s The Tempest in mind for The Darling. And here there are numerous echoes of The Adventures of Huckleberry Finn, including a less-than-admirable protagonist, a drowned father-figure, life on a river, and the ultimate determination to make a go of an independent, better life.
Let’s get the crime over with first. The Kid—whose problems all seem to stem from having a lousy mother, naturally—was convicted of soliciting sex with a minor. He didn’t actually have sex with her, but he certainly had reason to know she was only 14, and he certainly intended to commit the act (having arrived at her home with condoms, lube, and a porn DVD). There’s no attempt either on Banks’s part or the Kid’s to defend his conviction as entrapment or a legal mistake, and the Kid knows that what he did was stupid. As a result of the conviction, after serving time in jail, he’s on parole for 10 years, wearing an ankle-trace, and must stay away from children and any place where children might congregate. Which in the Florida county where he lives, because of the distribution of schools and parks, means one of only three places: at the airport, in the swamp, or under the Causeway. So he’s living in a tent under the Causeway with a bunch of other sex offenders, along with the Kid’s pet iguana, Iggy, in a settlement of homeless sex offenders. A police raid of the camp sets all the residents in motion, including the Kid.
At about the same time, the Kid meets “the Professor,” another extraordinary character who isn’t exactly likeable. He’s huge—tall, morbidly obese, bearded—and is a sociologist who studies homelessness. While the Kid’s story is fairly straightforward, albeit repulsive, the Professor’s is more convoluted. He is a certified genius who may or may not have deep dark secrets—he recalls a time when he was a government informant planted in student radical groups—and the reader, like the Kid, spends most of the book wondering what his motives might be for helping the Kid out.
While the Kid is too simple to lie, at least for very long (late in the book he admits that he’s glad the truth has come out about him because he has a hard time keeping track of the lies), the Professor is as unreliable as they come. He says he is who he says he is—now—but at the same time he reveals his undercover and deceptive past to the Kid, a confession that puts in doubt everything he claims to be true. In the end, the Kid concludes that the truth isn’t as important as what you choose to believe.
Amusingly, he reaches this conclusion with the help of a late-arriving character called the Writer. At that moment, the Kid is living on a houseboat in the swamp, but when he sees the Writer in the local store he realizes the man looks like someone he recognizes: “Now that the Kid notices him he thinks the guy looks like the famous writer Ernest Hemingway whose books the Kid has never read of course but he’s seen his picture in magazines and on TV even though he’s pretty sure the writer’s been dead for a long time.” What’s amusing about this is that Banks himself bears a resemblance to Hemingway, and so it’s not hard to imagine that he’s written himself into the end of the book as a way of bringing the story to its close.
The book is also, in some sense, about lost innocence. Despite his felony conviction, the Kid is technically a virgin. Early in the book he acquires a Bible, which he begins reading for lack of anything to take its place, and learns again the story of the Garden of Eden, Adam and Eve, and the snake. At the book’s end, he’s been to the garden—the swamp—and he’s seen the snake—an enormous Burmese python. And it’s not someplace he wants to stay.
While Lost Memory of Skin won’t appeal to some readers because of its subject matter, it’s a solid, compelling novel that is every bit as morally complex as Banks’s previous books, including Cloudsplitter, the deeply conflicted story of the abolitionist John Brown. And it is because of the subject matter, and the remarkable characters Banks has created, that this book might be his most memorable.