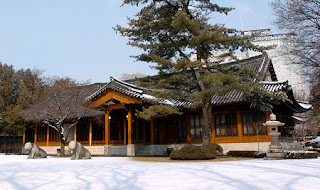 It was a great day, even though it’s been raining since early morning.

We began with a visit to Korea’s Ministry of Foreign Affairs and Trade for briefings on Korean-American relations, education policy, and health issues. We then split into two groups, with the former health volunteers visiting the Korea Foundation for International Healthcare and the education volunteers touring Yonsei University, one of the top universities in Korea.

We then went for lunch for a Korean specialty that’s kind of hard to explain. It’s called Sam-gey-tang, and is a chicken soup made with ginseng, chestnuts, jujubes, and other fine ingredients. (Okay, so maybe it’s not so hard to explain, but that description doesn’t do it justice.) Served with a glass of persimmon wine, which tastes a little like Fanta orange.

And then we headed to the next event. The American Ambassador, Kathleen Stephens, who was a Peace Corps Volunteer in Korea at the same time I was, hosted a meeting at the beautiful residence (pictures at left, although that picture is from the Embassy’s website and was taken in winter; it opened while I was a volunteer in Korea in the ’70s) including a briefing by officers from the economic, political, and public affairs sections of the Embassy. The Ambassador is a very impressive diplomat, and maybe some readers will be interested to see this “virtual photo book” called Kathleen Stephens’ Korea 1975-77 with photos she took during her time here as a volunteer.

I hope you will also be interested in this special photo exhibition of pictures taken both by Peace Corps Volunteers and Korea International Cooperation Agency Volunteers: A Story of Volunteerism.

This evening we attended a lovely dinner hosted by the Korea Foundation, which is responsible for implementing the revisit program. They’ve put an enormous amount of work into the program.

Which brings us to the end of Monday. Tomorrow we’re off to our respective sites, so I may not be able to post again until I return to Seoul on Wednesday evening.