>We’re past the halfway point, sadly. But Monday was a busy day. We started with a publishers’ panel, featuring Kathy Pories from Algonquin, Tod Bottorff from Turner, and Liz Van Hoose from Viking/Penguin. Mostly they talked about their processes and the state of the publishing industry. But they hadn’t addressed the issue of short stories and so I asked the inevitable question–what’s the state of the story collection market? They confirmed what I knew–and what I thought others needed to hear–which is that larger publishers for the most part are interested mostly in novels and will take collections as part of a multi-book deal where they can try to build a readership for the writer. Later I spoke privately with Pories about the fact that smaller presses are actively seeking story collections and she seemed to think that this was a great way for writers to go.

Next was an editors’ panel with David Barber from The Atlantic, Don Share from Poetry, Philip Terzian from The Weekly Standard, and David Yezzi from the New Criterion. The discussion was mostly about poetry and the point was being made that there isn’t enough of a critical discussion these days–it seems that there’s a real hunger in some magazines for critical essays.

There was a discussion with agent Georges Borchardt after that and I confess that I missed it–too much to do! During workshop time in the afternoon I made a dent in the stories I needed to critique for Tuesday, and then in the late afternoon we had the reading by Richard Bausch. He read the story “Sixty-Five Million Years” from his new story collection, Something is Out There. Good stuff–I love the character of the boy in the story.

Immediately after the reading we had a “conference reception” on the lawn of the Women’s Center. A “conference reception” is one with a bar and great food–and this food was exceptional. But after a few minutes the rain came and everything had to be moved inside. It was still fun, but a little damp. (The pictures in this post are of the staff tending bar in the rain. I think there’s irony in this, but I can’t be sure.) 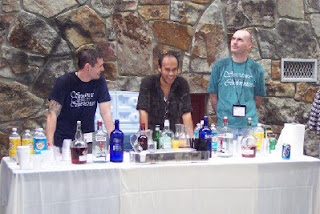 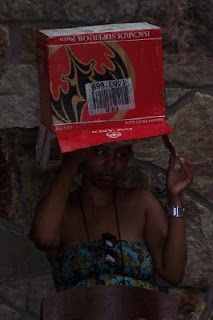 The evening reading was by Alan Shapiro, primarily reading new poetry in a sequence based on the Iliad. Fascinating stuff. As much as I would have liked to join the after party, I had work to do and so called it an early night. Tomorrow is another day.