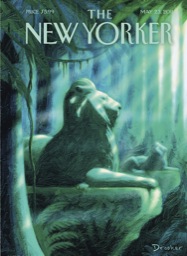 May 23, 2011: “The Trusty” by Ron Rash
On the downside, you can’t read this new story by Ron Rash online unless you have a subscription. The upside is that there is a mini-interview with him in which he talks a little about the story and his method.
As Deborah Treisman mentions in the interview, the story has a nice twist at the end, reminiscent of O. Henry. It’s about a convict named Sinkler who is working on a chain gang near Ashville, NC. It’s the Depression, apparently, and times are hard—although that’s not why Sinkler’s in jail. He’s a grafter and stole money from the bank where he worked—a job he took for the sole purpose of stealing. But by talking up the guards and bribing them with cigarettes, he’s managed to become a trusty, which means he has a little more freedom than some. He still has to work, though, and his job at the moment is fetching water from a nearby farmhouse.
He carries his two buckets to get water from a well and he meets young Lucy Sorrels, married to farmer Chet, whom Sinkler can see out in the fields. She’s pretty, Sinkler wants her, and he also hatches a plot to escape, taking Lucy along with him, at least for a while.
Trust is an important theme here. Sinkler’s a trusty, but he’s untrustworthy. He “trusts” to luck, but luck is also untrustworthy. And can he trust this Lucy not to turn him in.
It’s an enjoyable story, largely because of the ending. Along the way, the dialogue is great—wonderful unknown words that Rash has uncovered in his research on the period. It’s worth reading just for that.