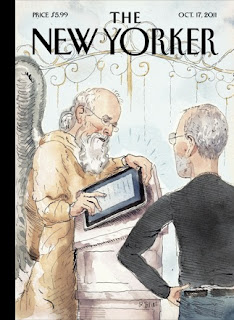 October 17, 2011: “Exorcism” by Eugene O’Neill
Eugene O’Neill is spinning in his grave, although it’s fun for us to have this “new” O’Neill play to study. “Exorcism” is a one-act play that was performed in a short run in 1920, after which O’Neill had all the copies destroyed. Except they weren’t, of course, and one recently turned up. It’s being published later this year and you can read it now in The New Yorker (if you have a subscription). (And if you don’t have a subscription, you can still go to the website and check out the video of an actor reading part of the play.)
To the extent there is suspense here, it’s mostly lost when the introduction tells us that the play is autobiographical and deals with O’Neill’s early suicide attempt. So when Ned Malloy drops broad hints (“Later? Supposing there wasn’t any—”), there’s not much doubt about what he means, although his pal Jimmy doesn’t seem to get it. Except he does, apparently, as he reveals later: “You’d been dropping hints—dark, dark hints—you weren’t yourself, you know—and I had my suspicions…”
The play isn’t about an exorcism so much as it is about resurrection. Ned attempts suicide, his friends save him, and now his eyes are open to the possibilities of spring, both literal and metaphorical. There’s been a reconciliation of sorts with his father, cessation of hostilities with his estranged wife, and the doom and gloom (again, both literal and metaphorical) have lifted.
It’s a quick read and I recommend it if you have access to it. But it’s not exactly O’Neill’s greatest work, and I don’t think I can blame him for wanting all traces of it destroyed.