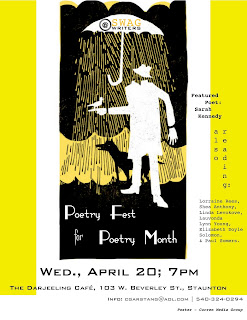 Last night, SWAG Writers—the Staunton, Waynesboro, Augusta Group of Writers—held its first (dare I say “first annual”?) Poetry Fest in honor of National Poetry Month. It was a huge success by any measure. Close to 50 people filled the Darjeeling Café, with a number of poetry lovers forced to stand or sit on the floor. (Pictures will be posted soon on the SWAG Writers Facebook Page.)
Darjeeling, which isn’t technically open yet—our event was private—is a wonderful spot for readings, as several of the guests remarked. SWAG would like to thank Mary Beth Morgan for opening the Café for us and we wish her well as she makes the final steps toward her public opening.
SWAG Writers was formed a year ago with a goal of raising the profile of local writers. We have hosted major readings like the Poetry Fest each quarter. We also held a panel discussion in 2010 on self-publishing, and plan to have other similar public discussions in the future. We hold a monthly happy hour on the Second Wednesdays of each month. Until this month we were doing that at the Mockingbird, but we’ve now added an open-mic component to the social gathering and we’ve shifted to Darjeeling. The next scheduled WriterDay/OpenMic is May 11, from 6-8pm.
SWAG remains informal, with no membership and no dues. We are a subgroup of the Blue Ridge Writers Chapter of the Virginia Writers Club, and we encourage our participants to join Blue Ridge Writers, but for now we plan to get by on donations to cover our minor expenses.
Our Poetry Fest was put together with the help of several people. In addition to the efforts of Mary Beth Morgan and the Darjeeling Café, we had the assistance of Lindsay Curren of the Curren Media Group who designed our poster, and Karen Lawrence of Karen Lawrence Creative Services who assisted with PR. Also, Maggie Duncan arranged for our promotional pens (they’re beautiful–let me know if you want one) and handled book sales last night. Thanks everyone!
At last night’s event we featured Sarah Kennedy and six other readers, and here are the bios of all the readers:

Sarah Kennedy is the author of six books of poetry, including Home Remedies

, A Witch’s Dictionary, Consider the Lilies, and Double Exposure . Individual poems, essays and reviews have appeared widely in literary journals, including Prairie Schooner, Shenandoah, Arts & Letters, VQR, and The Southern Review. She is the co-editor of the anthology Common Wealth: Contemporary Poets of Virginia, and she is a contributing editor for Pleiades and West Branch. Among her writing awards are The Strousse Award, the Paterson Prize, a Virginia Commission for the Arts grant, and a National Endowment for the Arts award. She is currently Associate Professor of English at Mary Baldwin College in Staunton, Virginia.

Lauvonda Lynn (Meade) Young’s poems and prose have been published in numerous magazines and anthologies, including: Branches in my Hand; The Blue Ridge Anthology; The Piedmont Writer; A Poem for Your Thoughts; and in her first book of poetry, Just A Woman

Shea Anthony has published two collections of poetry, The Forgotten Theater and Riddles of Corrosion. His work has also appeared in the anthologies The Still Horizon, Under a Quick Silver Moon and Passions of the Poet.

is Elizabeth’s second book of poems.

Lorraine Rees currently resides in Charlottesville, Virginia. Her first book, Contents Under Pressure, was published in 2007. Her second book, Goodbye Zoo, is set for publication in the summer of 2011.

Paul Somers is a native of Norfolk, Virginia, but has lived in North Carolina, Arizona, and California. A photographer, he currently lives in Harrisonburg. His first collection of poems, Animal Insight, was published in 2010.

Linda Levokove’s poetry has been published in the Poets of the Palm Beaches, Mid-American Poetry Review, Poetry Express, Hudson Review, The Blue Ridge Anthology, Poet’s Domain, and Tonight: A World Love Anthology. Her first book of poetry, Walk on the Heart Side