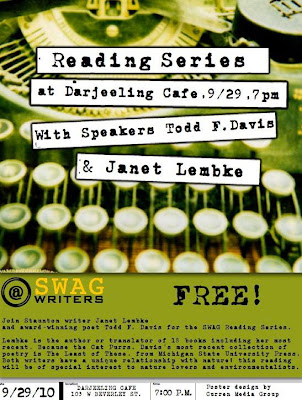 The SWAG Writers Reading Series continues this month with an event on September 29th at the Darjeeling Cafe (in the new space at 103 W. Beverley, Staunton, VA), at 7pm.

Todd teaches creative writing, environmental studies, and American literature at Penn State Altoona and in the MFA program at Penn State University Park. He has published three books of poems: The Least of These

(both from Michigan State University Press) and Ripe (from Bottom Dog Press). His work has appeared in numerous journals and he has received the Gwendolyn Brooks Poetry Prize.

Janet lives in Staunton and has published 18 books of nonfiction about the natural world and literary translation. Her most recent book is Because the Cat Purrs, which deals with human relationships with other species.

The event (sponsored by the Staunton Waynesboro Augusta Group of Writers, a subgroup of the Blue Ridge Chapter of the Virginia Writers’ Club) is free and open to the public. We hope lots of people will come out to enjoy the work of these two wonderful writers.

[The wonderful poster is designed by Lindsay Curren of the Curren Media Group.]