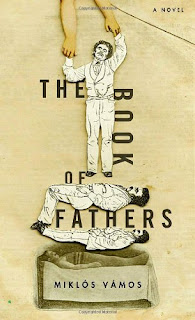 The Book of Fathers


While the point of this sprawling novel eludes me — is it that we should never forget the horrors of the past? — I can’t help but be impressed by its scope. The story begins in 1705 with the first entry in The Book of Fathers, a journal passed from father to son through eleven generations of a Hungarian family: “The Lord be praised, we reached the village of Kos in the month of April in His Year of 1705. Five times in that year and in the year thereafter was the village laid waste, thrice by the Kurucz bands of the insurrectio Rákócziensis, twice by the Labancz troops of the Emperor.” And so begins the saga, as young Kornél Csillag survives the various attackers, remembers what he cannot possibly have scene, and passes along extraordinary gifts to generation after generation. Some of Csillag’s heirs can see into the past, recalling what their ancestors have experienced; others can see into the future to what they themselves will experience. Some have profound abilities to learn music or languages known to their predecessors.

The family name morphs over time, from Csillag (“Star” in Hungarian or Magyar), to Sternovszky, to Stern (“Star” in German), and back. And over time the family suffers the oppression and anti-semitism of the Hapsburg Empire and then the Nazis and their collaborators, and then the Communists. The Csillags are winemakers, glassmakers, shoe salesmen, scholars, singers, gamblers. Some of the family members are successful in business, some in music or letters. But through it all, The Book of Fathers passes from hand to hand, from father to eldest son. A second volume is created and then a third, and then the latest generation puts a file on his computer in which he carries on the tradition.

As the story approaches the present through Henryk Csillag-Stern, raised in New York but now back in Hungary where he feels more comfortable, the horrors of the past seem to have receded (although Henryk’s father has been killed by urban thugs, not unlike the marauding bands of 1705). His son, Konrád, is blessed: “At a year and a half, he was able to recall and recite stories he had heard, word for word. Poems heard a few times also came out exactly as the originals, and again and again.” The boy solves puzzles with ease and draws, even using the computer. When asked how he knows how to do this, he says it’s because Henryk knows. He has the memory of the old times, and draws from that. And then, when he is four, he creates a Book of Fathers. On the occasion of a solar eclipse, harkening back to an eclipse hundreds of years earlier seen by Kornél Csillag, Konrád “sees” in his mind what Kornél saw: “CAVE WATCH BEGINNING.”

And so what to make of all this? What are we to make of the thread of astrology mixed with the predictions of Nostradamus? What of the circularity, with Henryk and Konrád returning to the beginning of the book, both the place and the eclipse? And what does this portend for Konrád, whose gifts seem as strong as any in the Book of Fathers, which now appears as though it will continue. Henryk has done some research into the family tree, getting it mostly wrong, but Konrád, it seems clear, knows the answers. He knows what the family has been through, and he knows that he holds the key. What of these odd powers that the oldest sons have?

The saga is an impressive achievement, despite these unanswered questions, and well worth reading.