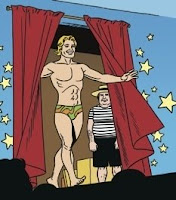 And that’s about all I’ve got to say about this story by George Saunders.

Although we’re in third person here, the style is free indirect, and so it feels very much first person, and it doesn’t take long to discover that Al Roosten is not only unreliable, he’s also inconsistent, self-absorbed, twisted, and not very nice. In other words, he’s a great character. Not very sympathetic—by the end, because you know there’s no chance he’s going to change, you’re probably rooting for him to get hit by a truck—but who cares? He’s funny. He re-evaluates everyone he knows in light of how they’ve treated him in the last five minutes, and he fantasizes about being welcomed into their loving arms, until he realizes how preposterously unlikely that is and so he goes back to hating them. Everyone. Except his nasty little nephews.

In the end, is he redeemed? He imagines knocking a homeless man to the ground and kicking him, but he does not do that. Is that redemption? For him, it actually comes close.

Not a great story, but a fun read.