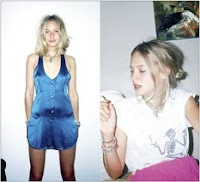 Everything is temporary. Vivian is living with Shelly in a temporary space (it’s not really housing at all) and they’re only temporarily friends. Vivian temporarily hooks up with Shelly’s temporary boyfriend. Vivian is a temp working in an adoption agency, where she was hired because she herself was adopted (having temporarily belonged to other parents, I suppose). And her adoptive mother gets very ill but then recovers. Temporarily. And then she dies, having, temporarily, taken up smoking because she thinks women who smoke look elegant. The point, it seems, is that Vivian is searching for permanence, and the only thing permanent in her life is that her mother is dead. The last line of the story is a beautiful statement of impermanence: “She kept her eyes closed as Vivian and her father watched the delicate curl of smoke dissolve and disappear, like sugar on the tongue.”

This is a good one. One of my favorites of the year so far.