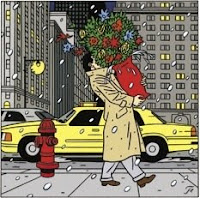 With one exception—and I suspect some may quarrel with me about that—the stories in the Winter Fiction Issue (December 22 & 29) are among the best of the year. But the issue was too late for me to include them in the Best New Yorker Story of 2008 poll, and so they aren’t in the running. [Note to self: Next year, why not wait until January to do the silly poll?] Consequently, I’m tempted to put an asterisk next to the winning story this year, because I’m not sure it will truly be the best of the year.

In any case, first up is this Donald Antrim story, which is funny and disturbing, both in an extreme way. Jim and Kate are planning to have dinner with Elliot and Susan. So far so good. Except that Jim, who is married to Kate (part love, part sham, since the marriage allowed him access to her health benefits, which is good because he seems to need frequent hospitalization as a result of nervous breakdowns), has recently ended an affair with Susan, who is married to Elliot, who is trying to start (or rekindle) an affair with Kate. Jim stops at a florist to get a bouquet for Kate who, unbeknownst to Jim—the story is told with an omniscient point of view—has been on the phone with Elliot for FIVE HOURS. But Jim obsesses over the bouquet, it grows to mammoth proportions while he argues with himself not only about flirting with the florist but also spending what is Kate’s money. Eventually, the other three area all drunk at the restaurant and Jim steals the huge bouquet, runs through the snow across town with his face buried in the flowers, and enters the restaurant disheveled and bleeding (roses). This is great black comedy and would make an excellent episode of Desperate Housewives, or maybe a pilot for its own show. Love it. And I love the punny title.