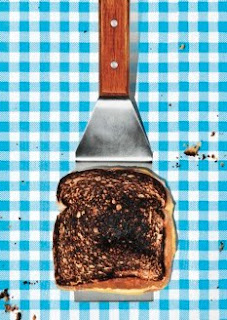 Although the ending of this story fell flat for me, the rest of it was terrific. The unnamed first person narrator is an underachiever who, at the age of 25, has convinced himself that steadily working his way up the hourly wage scale at a restaurant is a kind of success, and maybe the only kind open to him. He’s battling his manager though, and his apparent inability to make a grilled cheese sandwich. He is burdened by the expectations of his family and also the neat category into which he fell after high school: one “entering directly into the workforce.” Those words spoken by the cocky valedictorian of his class during their graduation ceremony still resonates for him—and haunt him.

The story gets interesting when a new waitress begins work at the restaurant. She’s “pretty but had no breasts or ass,” and is anorexic. Even so, at least she’s college-bound, which is more than the narrator can say. She calls him “funny boy.” And then “boy.” And then he thinks he hears her call him “pretty boy.” And it is apparently the first nice thing he’s ever heard about himself. “Really?” he asks.

There’s more going on here that I haven’t quite nailed down. What’s with the “Emerging International City?” for example. And what’s the joke about the plane crash got to do with anything?

The story requires more thought, but on first reading it’s most enjoyable.