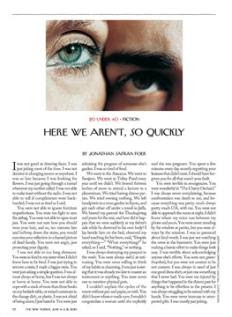 Does this story remind anyone else of Lorrie Moore? The story is short and until the last paragraph every single sentence uses a pronoun. The first paragraph is all “I” but the second is all “you” as the narrator gives information about a couple—the excuses they give, their quirks, their habits. Then there’s a paragraph that’s mixed “I” and “You” followed by a paragraph of “We.” Eventually “They” enter the picture—various third parties—and then “he” when the couple’s child is born. (Through him, time jumps forward: “He suddenly drew, suddenly spoke, suddenly wrote, suddenly reasoned. One night I couldn’t help him with his math. He got married.”
“And here we aren’t, so quickly,” says the narrator as the story nears its end. What does “aren’t” mean here? Non-existence? The sentences turn negative, although there are earlier negative sentences. Now, though, the statements are more . . . ontological: “I’m not twenty-six and you’re not sixty. I’m not forty-five or eighty-three, not being hoisted onto the shoulders of anybody wading into any sea.” Perhaps they’re dead, except he seems to say that they aren’t, or maybe he’s saying they did die—just peacefully, instead of the alternative. Or maybe they’re just retired, and that’s what “aren’t” means to him.
It’s a clever story, and thought provoking.
[available online only to subscribers, but here’s a Q&A with Jonathan Safran Foer]
June 14 & 21, 2010: “Here We Aren’t, So Quickly” by Jonathan Safran Foer