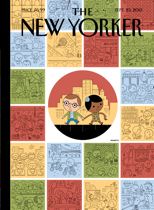 Ugh. Not another Tessa Hadley story, I complained (even though I usually like her stories). And, by rights, I should have hated this one. (It’s available free on line, by the way; click the title above.) The narrator—the first narrator, anyway—is a child, and I don’t usually like fiction with child narrators. It begins with the girl lying in bed thinking as she awakens—one of the tiredest clichés in the book. The story centers on the girl’s dream (the mother has a dream, too) and I generally despise dreams in fiction because they undermine, for me, the fictional dream of the “real” narrative. And to top it all off, the contributor’s notes for Hadley reveal that she has a new novel coming out called Clever Girl, and I guessed that this story might be an excerpt from that novel—another reason to hate it.

But, despite all that, I liked it a lot. Refuting my own complaints in reverse order: the Q&A with Tessa Hadley doesn’t say anything about this being an excerpt from the novel, and in fact the novel is already out, so perhaps it isn’t an excerpt after all. While it’s true that I don’t generally like dreams in fiction, this one influences the girl to act, and it is her action that is important. Plus, as the title suggests, the story is about dreams, and probably in more ways than one.  I still don’t like child narrators, but this child is interesting and the narration does shift to an adult midway through. And the story is about dreams, so it makes sense that it begins with the girl in bed, recalling her dream. That’s how dreams work, so cliché be damned.

The story is about a girl who wakes up from a dream in which she has discovered an epilog to her favorite book in which it is revealed how all of her favorite characters from the book will die in the future. She finds this so disturbing that she gets out of bed and after a little nocturnal wandering in the family’s small apartment, upturns the chairs in the living room. Her mother gets up at dawn and discovers the upturned chairs and draws the wrong conclusion about who did it, which leads her to reflect on her present circumstances.

I loved that. I also loved several other features of the story, including the fact that the characters are unnamed and the city is unidentified. Also, much is revealed about the apartment and its inhabitants organically—the girl roves through the apartment and sees or feels its features, none of which the author has to describe because we are seeing them along with the girl. Also, while the conflict in the story isn’t initially clear, the story is quite suspenseful for a variety of reasons—the space is confined, the family is financially constrained, the story happens mostly in the dark.

Take a look and let me know what you think. It might be my favorite for Story of the Year.